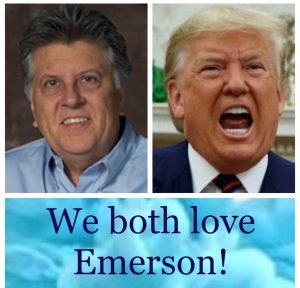 HT: To Roger Berry for the picture.  I am writing a book with Professor Michael Haykin on Ralph Waldo Emerson.  It seems the president likes Emerson.  I don’t think it is quite accurate to say, “I love Emerson,” but he has been a very productive conversation partner.

Some of you know about my critical piece on Trump which was cited favorably on the Gospel Coalition and elsewhere.  I still stand by everything I wrote.  Here it is:

I did not vote during the 2016 election when it comes to president.  For everyone else, I cast a vote.  And I still stand by that decision.  And yes, I think it was my patriotic duty to not vote.

But things can change…

I regularly preach (really I teach it) that true education is many things, but one thing for sure: painful.  The ancient Greeks had a name for it: mathein pathein.  “To learn is to suffer.”  If you are truly learning, you have to face deficient views/ideas you previously believed.

Do I think my previous thoughts on Trump deficient?  Largely, I do not, especially because I was addressing some specific areas of concern and those have not changed.

And yet, I want to remain open to new dynamics.

I’m still not sure what I will do in the upcoming election, but this is the best piece that is causing me to consider Trump:

2 thoughts on “ME AND TRUMP”