Where are your places that offer good time for thinking?

Our friends at Rivendell at Yale University offer such a place. 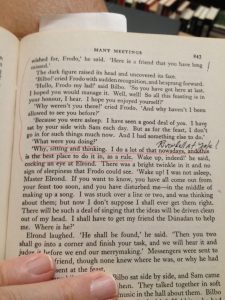 I still can’t believe that the good folks at Yale let even vetted researchers touch and turn these pages without gloves, but Doreen and I did so with great care.   I should add that it was kind of emotional for both of us as well!

This drives home to me again that the largely disembodied, behavioristic models of Christian growth need to be shown a better way. I am troubled and have written a bit (book reviews of Wild at Heart, Prayer of Jabez, and a “men’s” book, The Last Men’s Book You’ll Ever Need) on the silly and superficial models that are all too easy to criticize. Men who rave about the life-changing nature of Wild at Heart boot camps and earlier things like Promise Keepers remain immature as Paul said “in their thinking” and so struggle (needlessly I must say) with all manners of life.

Historic Christianity has the resources to offer compelling models that address the whole person. My fear is that pastors and other Christian leaders are increasingly ignorant of the riches that largely remain buried.

A few insights from one of our finest thinkers:

These are not just simple musings by a philosopher. Kass lives what he philosophizes. I saw that when I was a graduate student at the University of Chicago and attended a seminar that he taught on the Book of Exodus. U of C, as we call it, is all about the “life of the mind.” The approach to learning and arguing there is incredibly rigorous. It was there that I learned how to think critically, how to construct an argument, and especially how to take responsibility for that argument.

Kass makes a simple statement that contains profound wisdom and depth: “Lovers, we know, are face to face,” he writes. “Friends are side by side. What kind of ‘being together’ are we fashioning in cyberspace and on our screens?”

The article is here:

Not always, but there are certainly times of struggle either to make sense of the text and/or to make sure I really believe it.  As the Puritans liked to say, make sure to preach to yourself before you preach to others.  Really believing the Word of God is more difficult than determining its proper meaning.

Then God brings light, many times much light, and I can’t write fast enough.

It is one reason I don’t like to preach every week.  The process of preparation is best if I have months to mull and consider a text.  I want to stew on it for a long time.

I take many notes and ask many questions.  Commentaries come at the end to make sure I am in the ballpark of sound exegesis.

All this is one reason why I wish lead pastors preached less frequently.  It would be better for them and for the congregation.

Jordan Peterson is a firebrand, but that does not mean everything he says is incorrect.  When it comes to the Bible he certainly makes errors.  I do find it both entertaining and even educational listening to him.

In the video below you can see the dynamic of “simplistic questions, complex answers.”

I have some reservations about The Benedict Option (my review is just below this), so I would not agree with the full thrust of Kaplan’s prescriptions, but there is much here to consider.

I certainly agree with Kaplan’s closing comment: “Christians do not have to diminish doctrine in order to thicken the practices that can enable them to flourish as a minority—on the contrary, they’ll find that practices deepen it.”

“I never saw a fruit-bearing Christian who was not a student of the Bible. So few grow, because so few study.” -D.L.Moody

The words are in quotation marks because they are borrowed from Mike Ovey’s column in a recent issue of Themelios.

This is the stance that insists that all the relevant biblical passages on a stated subject are exegetically confusing and unclear, and therefore we cannot know (hence “imperious”) the mind of God on that subject.

The historical example that Ovey adduces is the decision of a church Council during the patristic period whose decisions have mostly been forgotten by non-specialists. At a time of great controversy over Christology—specifically, over the deity of Christ—the Council of Sirmium (357), which sided with the pro-Arians, pronounced a prohibition against using terms like homoousios (signaling “one and the same substance”) and homoiousios (signaling “of a similar substance”). In other words, Sirmium prohibited using the technical terms espoused by both sides, on the ground that the issues are so difficult and the evidence so obscure that we cannot know the truth.

Sirmium even adduced a biblical proof-text: “Who shall declare his generation?” they asked: i.e., it is all too mysterious. Nevertheless, the orthodox fathers Hilary of Poitiers and Athanasius of Alexandria assessed the stance of Sirmium as worse than error: it was, they said, blasphemy. They decried the element of compulsion in Sirmium’s decree, and insisted that it was absurd: how is it possible to legislate the knowledge of other people? But the blasphemous element surfaces in the fact that the decree tries to put an end to the confession of true propositions (e.g., the eternal generation of the Son).

Practically speaking, the claim of dogmatic ignorance, ostensibly arising from Scripture’s lack of clarity, criticizes Scripture while allowing people to adopt the positions they want. This art of imperious ignorance is not unknown or unpracticed today.