I rarely read complementarian literature these days. I felt it lost its way when it became an all-embracing view of the world and not simply a matter for church and household. I am a firm believer in a male-only ordained ministry in the church but I find increasingly bizarre the broader cultural crusade which complementarianism has become. It seems now to be more a kind of reaction against feminism than a balanced exposition of the Bible’s teaching on the relationships of men and women. Thus, for example, marriage is all about submission of wife to husband (Eph. 5) and rarely about the delight of friendship and the kind of playful but subtly expressed eroticism we find in the Song of Songs. Too often cultural complementarianism ironically offers a rather disenchanted and mundane account of the mystery and beauty of male-female relations. And too often it slides into sheer silliness.

My friend, Roger Berry, sent this my way.  Christian faith in action!

My first wedding…for a friend, that is!  Twenty-one years young. 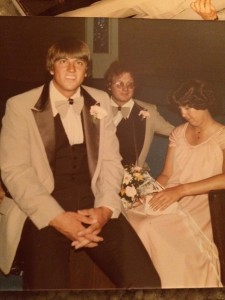 Let’s get one thing quickly out of the way.  I believe homosexuality is contrary to God’s design.  I also believe marriage is between one man and one woman.

The legalization of homosexual marriage to some degree makes me feel like Marshall McLuhan who went to movies not to watch the movie, but to observe how other people watch movies.

Some good things have been said by Christian leaders.  Unfortunately, there are too many other Christians depressed over what all this portends for America.  This declinist narrative focuses like a laser beam on how the sin of homosexuality is to blame for a myriad of societal ills.

My concern may be best stated by using an illustration.  Imagine that you want to start a landscape company.  You eagerly knock on your neighbors’ doors and announce the new venture.  The responses you receive range from amusement (“you can’t be serious”) to outright anger. Why?  The answer is simple.  Your yard is terribly overgrown and quite the eye sore.  You’ve received regular warnings from the Homeowner’s Association.

I’m not a cynic about the church, even here in America.  It is God’s primary means of accomplishing His will.  Some of the best people I know go to church on a regular basis.  And that includes some pastors!

However, I do have grave concerns about our laser-like focus over the horrors of legalizing homosexual marriage.  Yes, we need to say something, but I’m afraid our quickly cutting to the chase on this issue leaves many important things unsaid.

My suggestion would go more along these lines:

We believe homosexuality is a sin.  We also believe that gluttony, gossip, adultery, sex outside of marriage, racism, unscrupulous business practices, the love of money, divorce, and a whole host of other things are sins as well.  Unfortunately, we have not done a very good job in communicating a comprehensive view of sin.  We have been selective.  Too many times we have been motivated by fear.  We have avoided addressing certain sins for fear our giving at church will plummet.  Too many of us have come across as both hating the sin of homosexuality and the homosexual.  We could go on with other specifics, but hopefully you get the point.  Our selective outrage has made us not act like Jesus.  We have been rather poor at modeling the “grace and truth” approach of Jesus.

In our quest to proclaim the righteousness standards of God, I’m afraid our selective outrage presents a gospel which is no longer the gospel.  Consider another illustration.  Picture that you are driving a car.  In the passenger seat is a non-Christian.  You tune into your favorite radio station.  The problem is that you are not fully tuned in.  You are so accustomed to the static that you fail to hear it.  You turn to your non-Christian friend and expectantly ask what he thinks about the “amazing” music.  Surprisingly to you, he is not impressed.  You are baffled by his lackluster response but your habitual listening to music cum static has dulled your ears.

During my years of doing radio interviews, I had the chance to interview Cal Thomas.  Thomas was one of the major leaders in the Moral Majority.  I was interviewing Thomas on a book he co-authored with fellow Moral Majority leader, Ed Dobson.  The title gives away the thrust of what the authors were trying to address: Blinded by Might: Why the Religious Right Can’t Save America.  It was a courageous and candid confession of zeal gone awry.  Among other things, the Moral Majority would purposely give prominence to certain social issues knowing these would increase their financial giving.

I’ve been reading through various statements on the recent ruling about homosexual marriage by the Supreme Court. In the pages of Christianity Today Mark Galli reflects the tone that should be more widespread in the Christian church:

Another temptation now is to point the finger at the forces—political, social, philosophical, spiritual—arrayed against the church and its moral teaching. Without denying the reality of “principalities and powers” (Eph. 6:12), we do well to ponder this: What actions and attitudes have we imbibed that contribute to our culture’s dismissing our ethics? Our homophobia has revealed our fear and prejudice. Biblical inconsistency—our passion to root out sexual sins while relatively indifferent to racism, gluttony, and other sins—opens us to the charge of hypocrisy. Before we spend too much more time trying to straighten out the American neighborhood, we might get our own house in order. Blessed are the poor in spirit who mourn their sins (Matt. 5:3-4).  (Emphasis added)

In the same vein, my dear friend, Pastor Jeff Teague, likes to expose how much we Christians tend to be insensitive to our own sin.  Utilizing his considerable acting abilities, Jeff asks with faux disdain, “Why is it that Jesus only hung around sinners?”  Many bite and respond with something like, “Yeah, that’s right.  He did hang around with a lot of unsavory types.”  By their response, many reveal that they feel different and therefore distant from the sinners Jesus regularly spent time with.  Then Jeff answers his own question, “Because sinners are the only people who exist!”

So yes, be ready to share about God’s design for marriage, but realize your answer may cloud more than clarify if it does not come with some honest comments about the sins which many times find safe harbor in the church.

The man in the picture above is my friend, Evan Hock.  Evan is pastor of Trinity Fellowship Church in the Denver area.  We met during our respective studies at Trinity Evangelical Divinity School.  The picture is a nice depiction of Evan: thoughtful, but with a playful smirk about to tell you who knows what.
In an email exchange over a friend’s infidelity, Evan wrote this:
“…I am finding out that many of these ‘breakdown’ cases (with men in their mid-40s and 50s) arise from men who have not taken seriously enough the cultivation of a degree of spiritual formation within their lives internally. It has been all-to-often tilted towards doctrinal and rational consistency or built upon gifted performance and diligence but at the expense or neglect of deeper questions addressing ‘truth in the inner part.’ There has been a growing disconnect within them. In time, certain passions, perhaps out of fear of having lost something, or missed something desired, or a yearning to connect to something more, so they assert themselves recklessly in the name of a ‘fuller life.’  In the process, they question the reality of their faith.”  (Emphasis mine)

So much truth in so few words:

If each spouse says to the other, “I will treat my selfishness as the main problem in the marriage,” you have the prospect for great things.

I am married to the woman in the picture above.  Doreen is wise in many ways.  In light of me counseling some married folks recently, Doreen shared her insight with me:

“Our jobs as wives is not to make our husbands who we want them to be.  Rather, it’s to encourage them to become who God has created them to be.”

Seems like pretty clear counsel, but how many of us follow it?  And by the way, this also applies to us husbands!