I have not been a big fan of Carter’s for many years, but Randall Balmer’s fine book stopped me a bit short.  Here is my interview with Balmer.  It will appear tomorrow on Jesus Creed:

I first heard of Randall Balmer during my studies at Trinity Evangelical Divinity School.  Later, we met for lunch in New York City.  We both are TEDS graduates and have done specials for PBS, so it seemed like the thing to do.  Randy’s PBS series, Mine Eyes Have Seen the Glory, was nominated for an Emmy.

Balmer is a gifted writer of over a dozen books and currently teaches at Dartmouth College.

Moore: I’ve read several presidential biographies, but must confess that I avoided Carter until now.  Carter’s bland predictability didn’t draw me.  I guess I want more drama in my presidents, at least in reading books about them!  What led you to tackle this rather vanilla president?

Balmer: Historians have an axiom that history is written by victors, and that has been the case with Jimmy Carter, especially in relation to his successor as president, Ronald Reagan. For more than three decades now, we’ve been hearing about the so-called Reagan Revolution and how Reagan saved America from the “malaise” of the Carter years. I’ve always believed that the achievements of the Reagan administration were exaggerated and that Carter’s presidency was undervalued. One of the beauties of the historical profession, however, is that we revisit the past—and previous interpretations—every few years. We sort through the evidence once more and try to look at it with fresh eyes. Jimmy Carter is finally getting a second look—and I hasten to add that I’m not the only historian who is doing this. Others are also reevaluating the Carter presidency, and while almost no one regards the Carter years as an unalloyed success, Carter looks a little better in hindsight than he did at the time, especially his efforts at creating a climate for peace in the Middle East and his persistent warnings about America’s profligate consumption of energy.

My interest in Jimmy Carter dates to the early 1970s when he first came on the national stage. I was an undergraduate at Trinity College at the time, and I remember being astonished that a politician who was increasingly being taken seriously as a presidential candidate characterized himself as a “born again” Christian. This was the language we used to describe ourselves, of course, but what struck me was that Carter was so unabashed about that self-description. I was, to say the least, intrigued, as much by Carter himself as by the possibility that other evangelicals might finally awaken from their apolitical torpor and reclaim their own tradition of progressive social and political values.

Moore: Like your former professor at Princeton, John Wilson, I came away with a newfound appreciation for Carter.  Did that happen in any significant way for you?

Balmer: It’s difficult not to be impressed with Carter if you look seriously at his life, his priorities, and his accomplishments. My favorite quote about Carter comes from James Laney, the former president of Emory University, who said about Carter that he was the only man in history for whom the presidency was a steppingstone. I think that pretty much captures Carter’s activities since leaving the White House, but, as I say, I think his accomplishments as president—the Panama Canal treaties, a recalibration of American foreign policy, environmental preservation—were anything but negligible.

Moore: Your book gives a balanced portrait of Carter.  You don’t pull your punches about his missteps and you don’t downplay how disastrous some of his decisions were.  When you spent time with the president, did he try to push back on any of your critical assessments of his presidency?

Balmer: Carter took issue with my characterization that, as an outsider to Washington, he had a vexed relationship with Congress. He pointed to a study that showed that, with the single exception of Lyndon Johnson, Carter had a more productive relationship with Congress than any modern president. He’s right, of course, although toward the end of his presidency that relationship soured somewhat, especially when Edward Kennedy effectively broke with Carter in order to challenge the incumbent president for the Democratic nomination in 1980.

Balmer: Yes, there’s some truth to that. As president, Carter, I think, was overwhelmed by the scale of the job. While a state senator, he had promised to read every bill that came before the Georgia State Senate, and he tried to bring that attention to detail to the presidency. Several people told me that they had seen Carter’s glosses on the federal budget; he had actually tried to scrutinize expenditures line by line. And then there’s the famous incident where Carter was actually keeping the log for the White House tennis court.

Moore: Given your three characteristic definition of what makes a person an Evangelical (yours being slightly different from David Bebbington’s), do you think it is possible to also use evangelical as an adjective as in evangelical Roman Catholic or evangelical Orthodox?

Balmer: With all respect to David, I think his definition is unnecessarily recondite. If an evangelical is characterized by “biblicism,” for instance, “crucicentrism” is redundant; “crucicentrism,” after all, is at the heart of the Bible. I prefer a more functional, trinitarian definition: An evangelical 1) believes that the Bible is God’s revelation to humanity; 2) believes in the centrality of conversion; and 3) honors the mandate to evangelize. I see no reason why that definition cannot apply to Roman Catholic or Orthodox believers.

Moore: Douglas Brinkley titles his 1999 biography of Carter, The Unfinished Presidency.  It seems you would concur with Brinkley’s assessment.

Balmer: Yes, David Brinkley’s book is excellent. Although I take the argument in a slightly different direction, I think we agree that the reason Carter has been so productive as an ex-president is that he wanted to complete some of the initiatives he undertook as president. Carter, in fact, told me that in so many words. He said he doubted he would have been so active since leaving office had he won a second term in 1980.

Moore: You include the text of Jimmy Carter’s so-called malaise speech.  I was amazed how vulnerable Carter was about his failures.  Do you know of any other modern president who was that candid?

Balmer: No, I think it’s pretty much unprecedented. The only episode that comes close, I suppose, is Bill Clinton’s acknowledgement of culpability in the Monica Lewinsky episode. But that, of course, was a different matter from Carter’s “Crisis of Confidence” speech. Carter was remarkably honest about both himself and his nation—and his political enemies used it mercilessly against him.

Moore: You cover a lot of terrain in Redeemer: the Life of Jimmy Carter even though it is barely over 200 pages.  What do you hope readers would take away from your book?

Balmer: I hope readers come away with a new appreciation not only for Carter but also for the long and distinguished tradition of progressive evangelicalism in American history.

At one of the memorial services for Dallas Willard a USC colleague offered a wonderful eulogy: Dallas was a man whose hearing didn’t get better when praise was thrown his way.

It seems we are living during a legitimate epoch change.  I reviewed a book on this topic and here is terrific summary of the issue:
http://www.thegospelcoalition.org/blogs/trevinwax/2014/10/21/3-definitions-of-secular-and-why-they-matter-for-our-mission/ 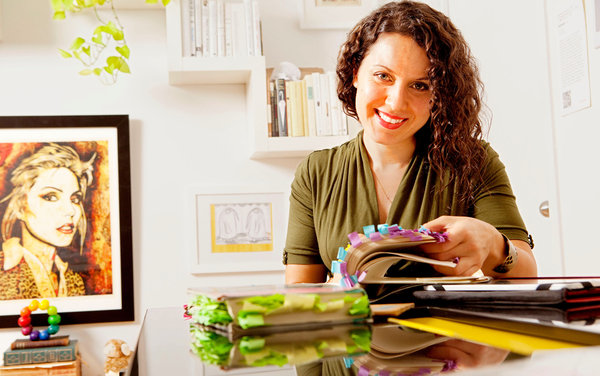 Some good advice from a happy humanist: 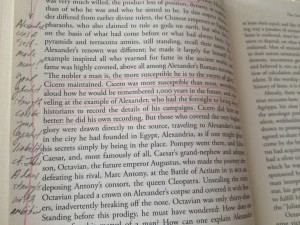 Above is a picture out of my copy of Augustine’s Confessions.

I am listening in parts to a long interview with Maria Popova, curator of Brain Pickings (recommended yesterday).  During the interview, Popova and Tim Ferris, the interviewer, bemoan the fact that publishers limit how many quotes you can easily access on Kindle.  The number is high, but there is a limit and the only way around it is time-consuming.

So I will continue to read books the old fashioned way!

Well worth stopping by: http://www.brainpickings.org/

David Brooks: Burke is famous for his belief in gradual change. He didn’t believe in revolutionary change because he thought that society was too complicated to be planned through reason and remade according to that plan. My students [at Yale] were divided on this. Some saw wisdom in this modesty, pointing to failed efforts to remake societies, ranging from the war in Iraq to the Russian revolution. Others pointed out that most systems are constructed by those in power for those in power. If you don’t have radical change, you just allow entrenched privilege to stay in power forever. 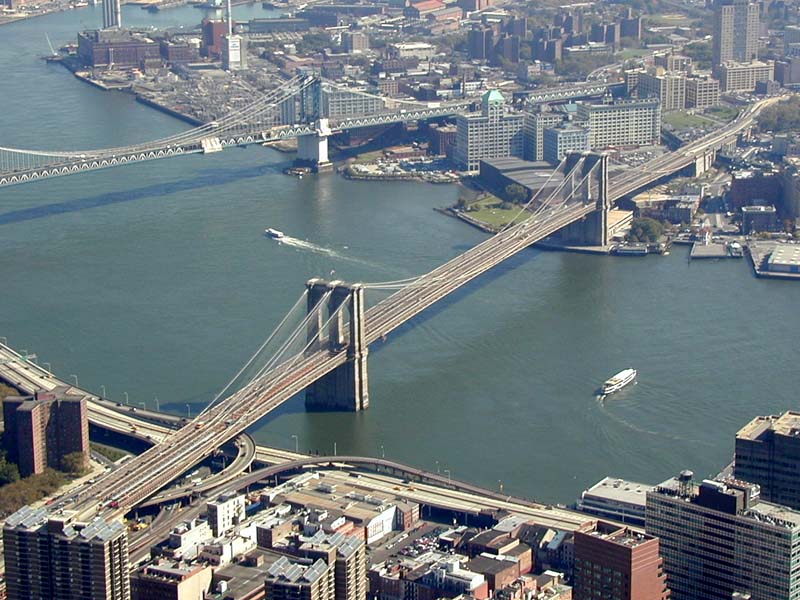 “The idea that some lives matter less is the root of all that’s wrong with the world.”

Tim Savage is the pastor of a church back in my hometown of Phoenix. I vividly recall Tim telling me that Morna Hooker, his doctoral supervisor at Cambridge, seemed to understand the pathos of Paul better than many male, Pauline scholars.

Hooker can hold her own intellectually against any male New Testament scholar, but it does seem many (not all) women may have a bit of an edge in picking up the less than rational components.

Allow me to clarify a few things, but please know my thinking in this area is provisional and partial. Not much is set in stone.

“Less than rational components” does not equal anti-rational. Like Pascal, I think “the heart has its reasons that reason knows not of.” This certainly does not make these “less than rational” things irrational.

As to an example, perhaps we could look at Paul’s affliction which resulted in despair (II Cor. 1:8,9). We don’t know for sure, but perhaps some of that affliction was not physical in nature. And maybe a female scholar might be more sensitive that the non physical affliction of the “concern for all the churches” could’ve contributed to Paul’s despair.