Take a fascinating group of influential leaders from a variety of professions. Mix in an author’s ability to find the telling story, anecdote, or insight. Add a publisher’s penchant for producing beautiful books in both content and design and you get The Club!

Highly recommended and quite entertaining! 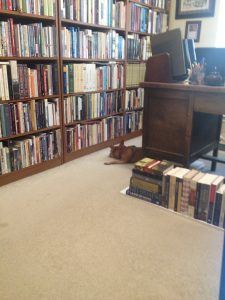 My interview that just posted today:

A Little Exercise for New Historians: An Interview

From Amazon:
The Bed of Procrustes takes its title from Greek mythology: the story of a man who made his visitors fit his bed to perfection by either stretching them or cutting their limbs. It represents Taleb’s view of modern civilization’s hubristic side effects—modifying humans to satisfy technology, blaming reality for not fitting economic models, inventing diseases to sell drugs, defining intelligence as what can be tested in a classroom, and convincing people that employment is not slavery.
From Me:
Insightful
Entertaining
Overstated
Lots to ponder
Some to dismiss
Glad I read

Bruce’s knowledge of the Bible was prodigious. Those who knew him well believed that he had the whole Bible, in the original languages and in several translations, committed to memory.

When he was asked a question about the Bible, he did not have to look up the text. He would sometimes take off his glasses, close his eyes as if he were scrolling the text in his mind and then comment in such an exact manner that one knew he was referring to the Hebrew or Greek text, which he either translated or paraphrased in his answer.

If he were in an academic context, the reference might be directly to the original language; in speaking to students who were not necessarily theologians, he would normally use a contemporary translation; in church he would use the appropriate translation familiar to the majority of his hearers, whether the Revised Standard Version, the New International Version, the New English Bible, the King James Version or in conservative Brethren circles, the New Translation by John Nelson Darby, again normally quoting exactly from memory.

He also seemed to know all the hymns of the classical and evangelical Christian traditions by heart as well as a large body of secular poetry–English, Scottish, Greek and Latin. (239)

This is a worthwhile investment of your time, but you will need to put on your thinking cap.  If you want to shorten the time spent, fast forward to the discussion among the three scholars.

Alan’s choices are good.  If we are going to take both the words seriously in “public intellectual,” there are others who are not out in public as much as they used to be (Chomsky) or have recently died (Eco).  My “on deck” list to complement Alan’s:

I am reading John Frame’s massive, A History of Western Philosophy and Theology.  Today, I came upon this dandy description Schopenhauer made of Hegel:

“Hegel was a flat-headed, insipid, nauseating, illiterate charlatan, who reached the pinnacle of audacity in scribbling together and dishing up the craziest mystifying nonsense.”

Important new book which I will be reviewing later.  For now, here’s a four minute summary of some of the themes: