Winn Collier is director of The Eugene Peterson Center for Christian Imagination at Western Theological Seminary.

The following interview revolves around Collier’s highly anticipated book, A Burning in My Bones: The Authorized Biography of Eugene H. Peterson.

Moore: Give us a bit of the backstory of how you came to be the person to write this biography of Eugene Peterson.

Collier: Well, I began reading Eugene over 20 years ago, when a generous church elder, who apparently knew I needed help, handed me a copy of Working the Angles. I was only paragraphs in when this pastoral vision Eugene described detonated in my soul. Eugene described what my soul ached for—but didn’t have any language to describe. I began to write Eugene letters, and remarkably, he wrote back. He became my pastor. In January 2017, after a trip to Montana that I assumed would be my last time to see him, I wrote Eugene and asked him about writing his biography. He hated the idea. But we kept talking, and eventually he warmed to it.

Moore: I have read several books by Peterson. All were terrific. I also read his 2012 book simply called, The Pastor: A Memoir. How is your book different than The Pastor?

Collier: The Pastor is a beautiful memoir (though he also resisted this and only wrote it after years of cajoling), but Eugene really didn’t enjoy talking about himself. So, there were lots of interior places he shied away from and numerous rabbit trails that he never considered interesting enough to follow (“why would anybody be interested in my life,” he’d often say to me). But like a bloodhound, I couldn’t help but follow the scent, sniffing my way to fascinating revelations and numerous insightful dimensions to his life. Also, he wrote his memoir through the lens of being a pastor, but I was far more curious about the fulness of Eugene as a person. And of course, Eugene’s memoir ventured little into the years after he left his church in Bel Air, MD—and Eugene had so many remarkable years after this, some of his best stuff really.

Collier: If we separate the material and physical from our encounter with God, then we’ve amputated a massive part of the gospel. Eugene insisted you could never separate geography from theology. The entire story of Scripture reveals God acting in particular moments, with particular people, in particular places. Jesus was born a Jew, to one mother named Mary and spent his childhood tucked away in one dusty village, surrounded by the troubled history of the tribe of Judah. If we ignore any of this, we misunderstand Jesus. The same way, Eugene was born under the shadow of the Swan Mountain Range, for years inhaling the scent of blood and wax paper in his dad’s butcher shop, feeling his mind and heart swell as he spent Saturdays alone in the rugged vastness of that Big Sky country. To miss any of this would be to miss part of Eugene…and to miss the particular ways that God’s grace surrounded and shaped Eugene. The whole earth—every osprey and sunrise and Appalachian hollow, every painting and carpenter’s angle and every loving kiss—declares the glory of God.

Moore: What do you think are Peterson’s best three books, or at least the ones that have spoken most powerfully to you?

Collier: Let me just stick with the ones that have meant the most to me. Working the Angles: The Shape of Pastoral Integrity names the poison in the pastoral stew better than anything I’ve read, and with precision that is both simple and daring, offers us the cure. Then either Leap Over a Wall or A Long Obedience in the Same Direction (sorry, two here) both offer artful guidance into life with God. As a third, I’d say Christ Plays in Ten Thousand Places, where Eugene sketches a panoramic, breathtaking vision of God’s presence in the world and with us—I don’t think this work has fully detonated in our imagination yet. There’s three (or 4). Ask me on another day, though, and I might give a different answer.

Moore: I think your book strikes a wise balance in not getting into prurient details about personal matters while still describing important details like the hurt Peterson experienced in his relationship with his dad. How did you decide what was appropriate to include and what was not?

Collier: That was tricky. I didn’t want to play into sensationalism or voyeurism. However, nothing would be more dishonoring to Eugene’s way that to stick him on a pedestal. He was human, flawed. For me, this is what makes his story so compelling. To encounter a person so fleshy and human, yet someone being transformed by holy love—that’s beautiful, that’s important for us to encounter. I wanted to include everything necessary to make it true and a well-crafted story but nothing that would merely serve as bait—that would only cheapen the story.

Moore: One disappointment I (and others) have had with Peterson is how he steered clear of what is called “polemics.” I certainly appreciate Peterson’s penchant for being irenic and avoiding nasty fights where pedantic points dominate the debate. It seems that Peterson’s desire to avoid the fleshly fray may have caused him to overreact. What do you think?

Collier: Perhaps due to my own disposition (or maybe overreaction), I tend to get more where Eugene was coming from—and operate mostly the same way myself. For Eugene, it was more about ways and means. It wasn’t at all that Eugene didn’t want to say hard things (he could light some fires, if you were paying attention), but rather Eugene felt that the way we go about polemics typically undermines whatever truth we were trying to get at. Also, he often simply distrusted the framing of the debate, the binaries, the assumptions. It wasn’t so much that Eugene refused to answer the question that was being asked—it was simply that Eugene was asking different questions. A friend once got frustrated with Eugene and accused him of being “coy.” Eugene winced at that criticism, and thought it was to some degree unfair. However, he took it to heart, and in his following book tried to be more direct in a few areas where he had something direct to say (the Christian misuse of power and the church’s idolatrous political alignment). However, I think his friend still found him coy.

Maybe we should handle this now. What nasty fight should we wade into?

Moore: Your well-crafted words honor your subject. You did a terrific job conveying a wide range of emotions from the humorous to the poignant. What are a few things that you hope your readers will take from your book?

Collier: I hope they will encounter Eugene, what it was like to sit with him (both in laughter and silence), to watch for the osprey to swoop into the bay, to hear his raspy voice, to sit at the table after dinner and share a bowl of butter pecan ice cream, to linger with a friend whose life has become a prayer. I hope a few readers will find hope again, just knowing that there are people like Eugene and Jan who’ve lived good lives, faithful lives, artful lives—people who are far from perfect, but people who are true and trustworthy. I hope a few readers will become more curious: what could my life, lived with such receptivity to God’s love and presence, be like? or maybe: what good story is God writing with my own ordinary days and years?

I have read several books on preaching. None have been duds, but this one may now be my favorite. I don’t know of any other book on preaching that accomplishes so much in so little space (under 150 pages).

Bruce Waltke and others are gushing about it and I add my name to the gushers.  Short, but full of powerful and wonderful insights.  Beautifully written. Integrative approach.  Careful biblical studies of memory along with things from neuroscience, psychology, etc.

And of course, you will learn how remembering is very different than recall.

Remember that you are moral…

“I preached as never sure to preach again,
and as a dying man to dying men.”

First, bombard a notepad (find a good one) with my favorite black pen (links provided).

I am taking down anything I see, questions I have, possible connections, illustrations, etc.

Second, cross off those things that start to go in the first draft.

Fifth, practice several times in bathroom with fan on so as not disturb my wife’s own studies.  I asked if she could hear me downstairs and she said the neighbors could!  That’s good! 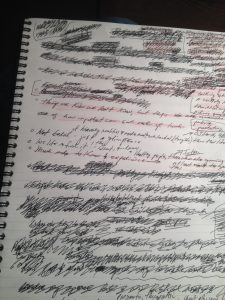 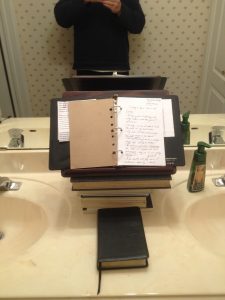 Not always, but there are certainly times of struggle either to make sense of the text and/or to make sure I really believe it.  As the Puritans liked to say, make sure to preach to yourself before you preach to others.  Really believing the Word of God is more difficult than determining its proper meaning.

Then God brings light, many times much light, and I can’t write fast enough.

It is one reason I don’t like to preach every week.  The process of preparation is best if I have months to mull and consider a text.  I want to stew on it for a long time.

I take many notes and ask many questions.  Commentaries come at the end to make sure I am in the ballpark of sound exegesis.

All this is one reason why I wish lead pastors preached less frequently.  It would be better for them and for the congregation.

*Have you ever heard a sermon on a developing a theology of work? If you have, did Bezalel and his buddy, Oholiab, figure prominently?

*Have you ever heard an entire sermon on a theology of rest?

*How often do Christians ask what you are learning from God’s Word?

*With respect to the previous question, how often do you ask your Christian friends?

*Has anyone ever told you that a minor prophet was formative in their spiritual development?

*With respect to the major prophets, has anyone ever mentioned Ezekiel?

*Have you ever heard a sermon on the silence of God?

*Have you ever heard a sermon on biblical rewards?

*Have you ever heard a sermon on how to obey the two commandments of Jesus in Mt. 10:16: Being both shrewd as a serpent and innocent as a dove?

*Have you ever heard a sermon on not confusing the flag with the kingdom of God?

*Have you ever heard a sermon on how we ought to treat “foreigners,” especially as applied to refugees?

This is some crazy stuff!

Preaching at three different churches on Lam. 1:1-6.  Much for us American Christians to digest! 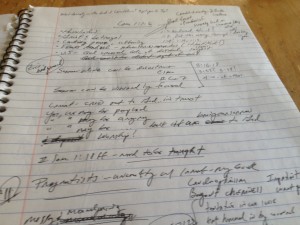