“I think ironically American evangelicals often seem to be more followers of Benjamin Franklin that they are of Jonathan Edwards. They [evangelicals] admire practicality, friendliness, moralisms, easy formulas, and quantifiable results. And while these Franklin-esque traits aren’t all bad they sometimes contribute to evangelical superficiality.”[1]

[1] George Marsden, “The Legacy of Jonathan Edwards,” Beeson Divinity School, Nov. 12, 2004. Emphasis added. The two major feeder streams coming early into American culture are the Enlightenment and Puritanism. See David A. Hollinger, “The Accommodation of Protestant Christianity with the Enlightenment: the Old Drama Still Being Enacted,” Daedalus, the Journal of the American Academy of Arts & Sciences, 141 (1) Winter 2012 and Marshall Shelley and David Goetz, “The Weapons of War: an Interview with James Davison Hunter, Leadership Journal, Spring 1993: 14-15.

Some of you know that I am trying to finish a book on trusting God in the midst of suffering.  It is titled, God, What on Earth are you Doing? an Honest Conversation.  Here is a picture of the process: 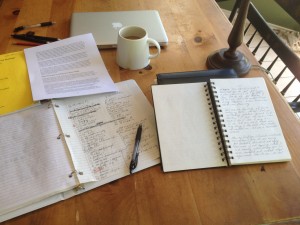 Jay Nordlinger is senior editor of National Review. He also contributes as a music critic to The New Criterion. I interviewed him on his book, Children of Monsters: An Inquiry into the Sons and Daughters of Dictators. (http://www.amazon.com/Children-Monsters-Inquiry-Daughters-Dictators/dp/1594038155)

Moore: You’ve written a history of the Nobel Peace Prize. Is Children of Monsters a companion work? Seriously, what led you to write such an offbeat kind of book?

Nordlinger: Some years ago, I was in Albania, which had suffered one of the worst dictatorships of the 20th century: that of Enver Hoxha. There was nothing else like it on earth, except for the dictatorship of Kim Il-sung in North Korea. (Hoxha admired Kim.) It occurred to me, “Did Hoxha have children? And if so, what must their lives be like?” That led to Children of Monsters.

Moore: Twenty dictators are featured in your book. How did these twenty make the Nordlinger cut?

Nordlinger: I went for the worst of the worst. To be blunt about it, body count mattered. Terror mattered. Degree of totalitarianism mattered. I have a few in there who don’t belong in a book called Children of Monsters – Franco is the obvious example – but most qualify beyond a shadow of a doubt: Stalin, Mao, Pol Pot, Saddam, et al.

Moore: Sadly, I can say (as I believe everyone can) I’ve interacted with dictator types in business, church, the arts, sports, and academia. Do the infamous dictators we typically think of simply have more access to power, and thus more opportunity to evil? In other words, is being a dictator more common than many of us may tend to think?

Nordlinger: I’m sure that’s right. The dictators I have studied have some things in common. They tend to be quite smart (unfortunately). Often street-smart, but smart nonetheless. They tend to be charismatic. And they are, of course, ruthless.

They also feel themselves born to rule.

Moore: The nature v. nurture debate continues apace. You briefly touch on this in your comparison/contrast between the two sons of Ceausescu. Now that you have finished writing do you have any further thoughts on why some children of moral monsters turn out okay, even denying their father’s wicked ways?

Nordlinger: I think this has to do with strength of conscience. Also, whom has a person been exposed to? I think of Svetlana Stalin, whose mother killed herself when she was six. Her brother, who was eleven, was raised by Stalin’s bodyguards: the hardest, most vicious men in the Soviet secret police. But Svetlana was raised by a nanny who was a warm Christian woman. That must have helped.

Moore: Notable in your list of dictators is the lack of women. Granted, there are many less women in human history who hold the reigns of political power, and there are some women who were very much a team player during their husband’s oppressive regime. I think right away of Elena Ceausescu. Given all that, do you think men tend towards violence more than women?

Nordlinger: I think they commit more violence than women. Are women equally supportive of violence? That would be hard to measure. All of these dictators – the worst of the monsters – have had their fans, very much including women.

Moore: In your chapter on Stalin, I have more marginal “Wows” than any other chapter.   Stalin’s daughter, Svetlana, rejected her father’s ideology and called him a “moral and spiritual monster.” To what degree do you think travel outside her homeland contributed to rejecting her father’s ideology?

Nordlinger: She had not really traveled outside her homeland before rejecting her father’s ideology. What did it, I think, was her conversion to Christianity. Also, Stalin had imprisoned or killed her beloved relatives – aunts, uncles, cousins – which hastened her skepticism, let’s say.

But you’re right: When Svetlana had the opportunity to go to India, her stay in that country made her more aware than ever of life outside the Soviet Union. She later wrote that India had “set free something in me.” While in India, she “lost the habit” of a Soviet way of life. And she sought political asylum in the U.S. embassy.

Moore: What are few reasons why people ought to read Children of Monsters: an Inquiry into the Sons and Daughters of Dictators?

Nordlinger: Well, that’s not for me to say! But I can tell you what others have said. They have learned something about dictatorship. And about families. And about human beings. Also, they have been left with an enhanced appreciation of what we have here in the West: liberal democracy, the rule of law – in short, freedom.

What do you call a group of aging friends talking about their growing physical infirmities?

I regularly read the blog posts of the eminent, New Testament scholar, Larry Hurtado.  His blog can be found here: https://larryhurtado.wordpress.com.

In a recent post on the death of Umberto Eco, Hurtado reflects on one of Eco’s books:

The book is fundamentally (it seems to me) an extended “send-up” of people who itch after exotic, esoteric stuff, disdaining what they view as simple notions, and conspiracy addicts (who, for example, insist that the moon landings took place on a Hollywood stage), the sort of people who mistake Dan Brown’s Da Vinci Code as anything other than an easy “beach read.”  (I’m told that Eco was once asked what he thought of Brown’s book, and he replied, “Dan Brown is a character in Foucault’s Pendulum!”)

…THAT I APPARENTLY DON’T

You can mock and hurl insults at your political opponent, yet still say you like them.

When every evidence says you are going to lose all that matters is what your own heart tells you.

Trumpeting how you are the only one to do certain, wonderful things that no other politician has, is not hubris, but a sign of competence.

A very important and rare perspective:

My friend, Roger, sent me an insightful article on Trump by Peggy Noonan.

One of several money quotes:

“But I keep thinking of how Donald Trump got to be the very likely Republican nominee. There are many answers and reasons, but my thoughts keep revolving around the idea of protection. It is a theme that has been something of a preoccupation in this space over the years, but I think I am seeing it now grow into an overall political dynamic throughout the West.