Some of you know that we came to Yale so Doreen could begin to do intensive research on Sarah Edwards, wife of Jonathan.  Most of you know that Doreen’s first book is on the ministries/marriages of Jonathan/Sarah Edwards, George/Elizabeth Whitefield, and John/Molly Wesley.  Doreen’s book is used as a required text by a professor of history and theology at Dallas Theological Seminary (DTS).  It is gratifying to hear how the students appreciate Doreen’s hard work.  Here is recent picture of Doreen speaking at DTS. 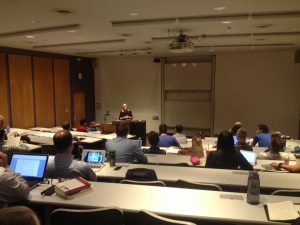 We usually stop in Dallas on our treks back east.  Our wonderfully encouraging friends, Bill and Helen Reeves, welcomed us into their lovely abode on our way to New Haven, CT. 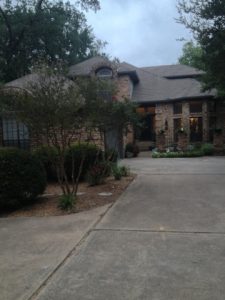 Our first big stop was in Knoxville, Tennessee.  Doreen’s sister and brother-in-law live there.  I was reminded that we were in the Bible belt when I stepped into the restroom of a Christian bookstore.  I guess several biblical truths could work like “Go…and Make Disciples!” 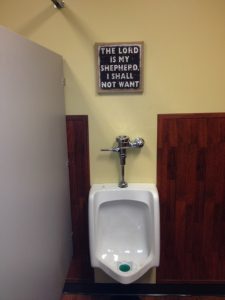 We made it safely to Yale.  Here is Dr. Ken Minkema, the Director of The Jonathan Edwards Center at Yale.  We had a terrific and productive time with him. 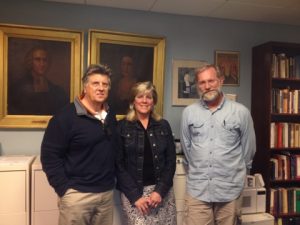 I close this log with a few pictures from one of our study locations.  These are from the Yale Divinity library. 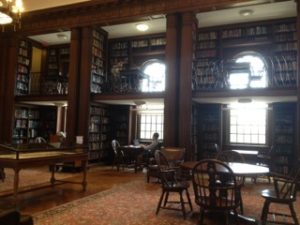 A peek out our window… 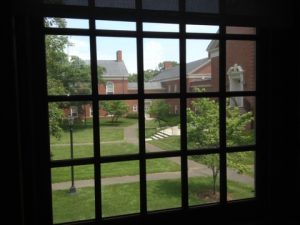 Above is a picture of my Dad.  Still going strong, or as he might say, kind of strong, at nearly 92 years of age.

Five things immediately come to mind when I think of my Dad:
*His work ethic
*Sense of humor
*Putting a premium on friendships
*Meaningful ministry in various places and with various people, including the very poor
*And perhaps most of all, his contentment in God no matter what life throws at you

Important new book which I will be reviewing later.  For now, here’s a four minute summary of some of the themes:

Well, at least the subject line applies to my reading habits.  According to historian, Douglas L. Wilson, Adams loved to write in books whereas Jefferson rarely did.  Adams wins this particular debate! 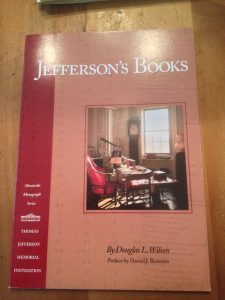 A cynic believes they have corralled all of reality into their own little brain and determined that things are bleak indeed.  There is, however,  a very big problem.  No one can know all reality, except God.  And God tells us that a mark of being a Christian is hope.

So, since no one is omniscient, no one has the right to be cynical.  There are all kinds of realities the cynic does not know about that would change their pessimistic outlook.

A brief reflection of mine to a friend wondering if pastors could be friends with those in their congregation.  My answer is “yes,” but my advice for all Christians is to choose wisely.  Here is my brief reflection:

You may know that Augustine wrote more about friendship than anyone else in the ancient period so his perspective adds light to our discussion.  Cicero, whose writings Augustine loved, also wrote on friendship.  Cicero’s work is just a little before Christ so the two give nice bookends to the ancient world’s perspective on friendship.  Cicero said you can’t be friends with tyrants or sycophants.  Yes, I know there are loads of those in the churches!  And with the laxity on choosing elders there are plenty of them on elder boards.  But the perversion of a good thing does not eliminate the need for the good thing.

In her eminently fascinating book, Carolyn Weber writes about the questions she hurled at a fellow student.  She then observes:

I now understand why the words conversation and conversion are evocative of each other, turning toward each other, yet separated merely by where you are “at.”

The short answer to my subject line is “yes.” The longer, but still short answer of “yes” resides in this tract for our times. I heard someone say that On Tyranny reminded them of Tom Paine’s Common Sense, a short, but powerful rallying cry for all Americans. The comparison seems apt.

Before you write off the author as some conspiratorial loon, keep in mind that Snyder is an eminent scholar of Eastern European studies. And it is the study of Eastern Europe that gives credibility to this work. Most importantly, is the fact that Eastern Europeans appreciate that things can go terribly wrong. Believing that a “new day in America” means “an even better day” is naive and shows that we are ignorant of history. Many of us, including our Western European friends, were stunned by the election of Donald Trump. Eastern Europeans weren’t.

I have two quibbles with On Tyranny. Neither are that significant. In the book and in a few lectures I’ve heard, Professor Snyder uses “the end of history” without defining it. Some of us are very familiar with the idea popularized by Francis Fukuyama, but others could be helped by some unpacking of the idea. My other minor reservation revolves around a sentence that closes out Professor Snyder’s third action step. Here’s the sentence: “We can be sure that the elections of 2018, assuming they take place, will be a test of American traditions.” I think it is safe to say we are already being tested, but not having elections in 2018? That strikes me, even as a pretty grizzled “no Trumpster” as incautious.

Like I say those are quibbles. I am glad to see this book getting such a wide hearing.