“Conservatives believe in unchosen obligations, whereas classical liberals think that the only source of obligation is choice.”

One of the best conversations I’ve heard about what really matters to evangelical faith when it comes to President Trump:

My interview with a scholar of James Madison offers some help:

Staying Home on Election Day? What would James Madison Say?

In a conversation with my wife this morning, she made me wonder whether McCain’s death may have a bigger effect than his life.  It made me think of Samson in Judges 16:23-30, esp. v. 30.

23 Now the rulers of the Philistines assembled to offer a great sacrifice to Dagon their god and to celebrate, saying, “Our god has delivered Samson, our enemy, into our hands.”

24 When the people saw him, they praised their god, saying,

“Our god has delivered our enemy
into our hands,
the one who laid waste our land
and multiplied our slain.”

25 While they were in high spirits, they shouted, “Bring out Samson to entertain us.” So they called Samson out of the prison, and he performed for them.

When they stood him among the pillars, 26 Samson said to the servant who held his hand, “Put me where I can feel the pillars that support the temple, so that I may lean against them.” 27 Now the temple was crowded with men and women; all the rulers of the Philistines were there, and on the roof were about three thousand men and women watching Samson perform. 28 Then Samson prayed to the Lord, “Sovereign Lord, remember me. Please, God, strengthen me just once more, and let me with one blow get revenge on the Philistines for my two eyes.” 29 Then Samson reached toward the two central pillars on which the temple stood. Bracing himself against them, his right hand on the one and his left hand on the other, 30 Samson said, “Let me die with the Philistines!” Then he pushed with all his might, and down came the temple on the rulers and all the people in it. Thus he killed many more when he died than while he lived.

A few scratches on the blackboard yesterday in preparation for a lesson on political philosophy.  I inherited a very messy board!: 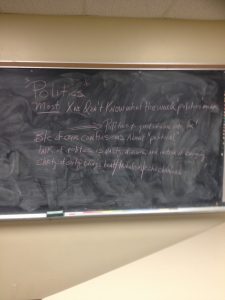 Gracious and prophetic reflections, not an easy thing to do… 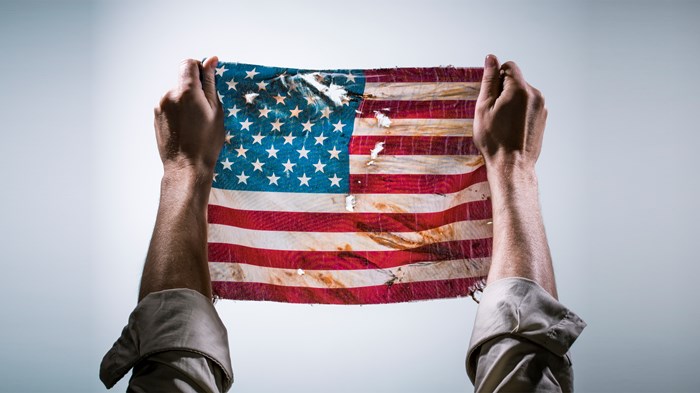