I have wanted to see this for many years, and finally did.  Absolutely great!  I love seeing excellence.  And to think that so many are consumed with excellence when it is only for a perishable wreath?  How much more ought I as a Christian shoot for excellence!  (I Cor. 9:24-27) It also makes me long for churches to be more like a great restaurant.

This past Aug. 31 my dad made it to six years before a century.  Still driving, still working, and most importantly, still walking with the Lord. 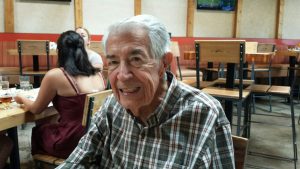 AFTER SIX WEEKS IN INDIA FOR HIS COMPANY, DELOITTE 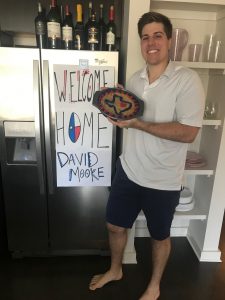 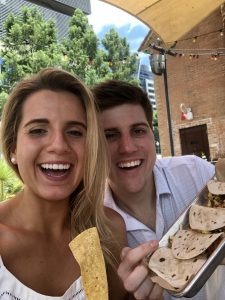 Deloitte flew David to Hyderabad, India where he is training accountants.  Chris is en route to Guadalajara, Mexico where he will be teaching Bible and philosophy at The Lincoln School.

PIctures of Face Time with David and with Chris just as he was leaving. 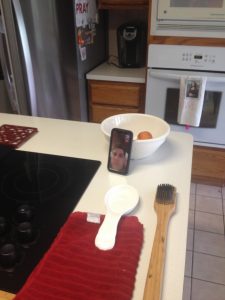 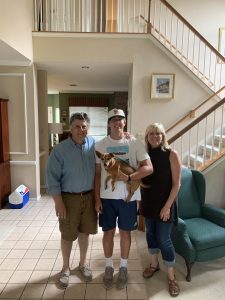 A good review of a book I know pretty well!

Above is a picture of my Dad.  Still going strong, or as he might say, kind of strong, at nearly 92 years of age.

Five things immediately come to mind when I think of my Dad:
*His work ethic
*Sense of humor
*Putting a premium on friendships
*Meaningful ministry in various places and with various people, including the very poor
*And perhaps most of all, his contentment in God no matter what life throws at you 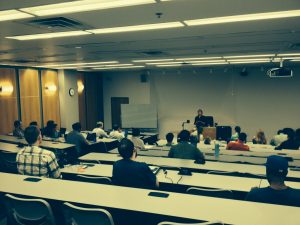 Here is Doreen teaching at Dallas Theological Seminary.  Professor Michael Svigel has Doreen in every year to talk about her book and field questions.  Doreen’s book is required reading for the class as you can see from this snippet of Michael’s syllabus for the course.

What President Obama told his daughters about Trump:

“What I say to them is that people are complicated,” Obama told me. “Societies and cultures are really complicated … This is not mathematics; this is biology and chemistry. These are living organisms, and it’s messy. And your job as a citizen and as a decent human being is to constantly affirm and lift up and fight for treating people with kindness and respect and understanding. And you should anticipate that at any given moment there’s going to be flare-ups of bigotry that you may have to confront, or may be inside you and you have to vanquish. And it doesn’t stop … You don’t get into a fetal position about it. You don’t start worrying about apocalypse. You say, O.K., where are the places where I can push to keep it moving forward.”

Wonderful advice that economist Steven Levitt received from his dad:

I remember this one time–I must have been like seven or eight years old–my dad took me to Gibby’s Diner. This was in the closest village called Quaker Street. And Quaker Street is just like one stoplight, a general store and the diner. And all my brothers and sisters had at one point worked at Gibby’s Diner either cooking or as a waitress or whatnot. And for my dad to bring me there alone, the two of us to sit at the counter, to this kind of sacred place. It was surreal to be there. And I remember we sat at the counter, and I don’t remember what I got to eat, but I remember my dad got a cup of coffee with a scoop of vanilla ice cream in it, which looking back I realized–he could have been a Starbucks imaginer. And I was having whatever I was having, and he introduced me to this game he called Powers of Observation.

And the way Powers of Observation worked was he would say, “All right, Stevie. I just want you to look around and take it in. Just really look around, pay attention, see what you’re looking at, take it in, and get attuned–and listen hard to, OK?” Like I said, I was probably just eight or seven years old, and he said “I’m going to give you five minutes to just take it all in.”

So I sat there and I looked around; and I take it all in. And I don’t really know where he’s going with this. And then after a few minutes, he told me to close my eyes.

“Nope. Chili. OK, how many people have come in since we started playing Powers of Observation?”

And on it went, just like that. And he’d grill me on these facts large and small, any kind of site, smell, sound–anything like that. And the first couple rounds we did this, I was terrible. I couldn’t get anything right at all. I just didn’t have any powers of observation. And then as we kept doing it, I got better. And then about after 20 minutes, I felt that I could take these little snapshots with my mind. And then repeat what I’d seen. My father, that one day, at Gibby’s Diner in Quaker Street, New York, he taught me that memory–or at least observation–is a muscle that you can build. And I’ve been flexing that muscle every day since then. Or at least trying to. So we were a family with practically no money, and without really that much time with each parent, but I will never forget that one day, that incredibly great thing, an incredibly valuable thing, that my father gave me.