I’ve seen a few magazines have a “NO COMMENT” section for those things that speak for themselves.  In keeping with that tradition, here is the church web site description of Trump enthusiast and Pastor of First Baptist Dallas, Robert Jeffress:

Dr. Robert Jeffress is Senior Pastor of the 12,000-member First Baptist Church, Dallas, Texas and a Fox News Contributor. He is also an adjunct professor at Dallas Theological Seminary.

Dr. Jeffress has made more than 2000 guest appearances on various radio and television programs and regularly appears on major mainstream media outlets, such as Fox News Channel’s “Fox and Friends,” “The O’Reilly Factor,” “The Kelly File,” and “Hannity;” ”ABC’s “Good Morning America;” and HBO’s “Real Time with Bill Maher.”

Dr. Jeffress hosts a daily radio program, Pathway to Victory, that is heard nationwide on over 800 stations in major markets such as Dallas-Fort Worth, New York City, Chicago, Los Angeles, Washington, D.C., Houston, and Seattle. His weekly television program can be seen in 195 countries and on 11,283 cable and satellite systems throughout the world, including China and on the Trinity Broadcast Network and Daystar.

Dr. Jeffress is the author of 23 books including When Forgiveness Doesn’t Make Sense, Perfect Ending: Why Your Eternal Future Matters Today; Countdown to the Apocalypse: Why ISIS and Ebola Are Only the Beginning; and his newest book was released February 16, 2016, Not All Roads Lead To Heaven: Sharing An Exclusive Jesus In An Inclusive World.

Dr. Jeffress recently led the congregation in the completion of a $135 million re-creation of its downtown campus. The project is the largest in modern church history and serves as a “spiritual oasis” covering six blocks of downtown Dallas.

Dr. Jeffress and his wife Amy have two daughters, Julia and Dorothy, and a son-in-law, Ryan Sadler

…in the Deloitte shirt after finishing the Tough Mudder Race. 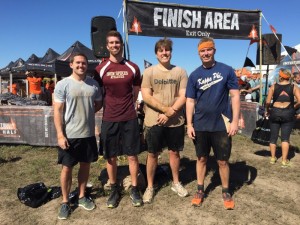 My review of Tim Keller’s Making Sense of God:

This came to me while I was driving the other day:

Be careful of not being a…

Here is my review of an important new book.  Keep in mind that those who interact with me in the comment thread come from all kinds of backgrounds.

End of Protestantism (a review of Peter Leithart)

Dones are those who still believe in Jesus, but are finished with church.  Here is one perspective followed by my own reflection on why Dones exist and are growing:

An Alternative Theory on the Dones

I sadly know too many Dones. Several have shared their stories with me. Some were in positions of leadership, even serving as elders. Two frustrations predominated:

Lots of talk in church about what one should do (and how), but precious little about why.

There was not a safe place where any and all questions could be asked. People are left alone to marinate in their own doubts and struggles.

“All leaders lead by example whether they intend to or not.”

(From the terrific book, Superpower: Three Choices for America’s Role in the World by Ian Bremmer, p. 191.)

Stay tuned for my review and/or interview…

There are many wise insights throughout this book.

Leithart also does a terrific job illuminating little known histories. These out of the way reflections should give pause to all conscientious readers. We are listening to a man who loves the church and knows its history. One example is so illuminating and cogent that I wish all Christians would have it put on their refrigerators. It details the despair many had during and shortly after the catastrophic WWI. Predictions about the world’s end were common. Too many Christians lacking a proper historic sense failed to appreciate that God could still be up to great things with His church which in fact ended up being the case. Here Leithart reminds us of the explosive growth of the gospel that has occurred throughout the world during the twentieth century. For the many Christians who are saying that “Hillary will forever change our country” I would recommend the wise counsel of Leithart.

On my active Amazon page you will find hundreds of my reviews and dozens of interviews on all types of subjects.  Check it out!