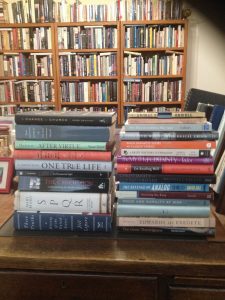 It was a terrific year of reading.  Many wonderful books.  I am being a bit more generous this year with a longer list of twenty-four, but I did get to read a bit more than usual.

To Change the Church: Pope Francis and the Future of Catholicism by Ross Douthat

My interview with Douthat:

To Change The Church: Interview With Ross Douthat

Why Should the Devil Have all the Good Music? by Greg Thornbury

My interview with Greg:

One True Life: The Stoics and Christians as Rival Traditions by C. Kavin Rowe

My interview with Rowe:

The Crucifixion: Understanding the Death of Jesus Christ by Fleming Rutledge

My interview with Rutledge:

An Unexpected Light: Theology and Witness in the Poetry and Thought of Charles Williams, Micheal O’Siadhail, and Geoffrey Hill by David Mahan

A rare case where I had to do the interview based on the publisher’s pdf, rather than a “real” book.  Since I am reading it with my marginalia “system” this year, it is counted for 2018.  The introduction alone would make a wonderful booklet on why Christians ought to read poetry.

My interview with Dave with some great recommendations from the readers:

Why Christians Ought To Read Poetry

On Reading Well: Finding the Good Life Through Great Books by Karen Swallow Prior

My interview with Karen: https://www.patheos.com/blogs/jesuscreed/2018/10/20/karen-swallow-prior-an-interview/

Karen Swallow Prior: An Interview

Edwards the Exegete: Biblical Interpretation and the Anglo-Protestant Culture on the Edge of the Enlightenment by Douglas Sweeney

My interview with Doug:

Pride and Humility at War: a Biblical Perspective by J. Lanier Burns

My interview with Lanier:

Pride And Humility At War

The Myth of Certainty by Daniel Taylor

The Myth of Certainty greatly ministered to me. It was my companion on a recent trip.

I often jest that I am a serial, not cereal (!) doubter. Dan does a terrific job of showing how the struggle to believe can (and should) be incorporated into our Christian lives.

Dan is a wonderful writer and brings into this conversation some insightful people like Ellul, Kierkegaard, Flannery O’Connor, and Pascal.

SPQR: a History of Ancient Rome by Mary Beard

SPQR is the famous Roman catchphrase Senatus Populus Que Romanus or The Senate and People of Rome.

If you know anything about Mary Beard (perhaps via BBC specials) you know this Cambridge professor is as feisty as she is brilliant. Her writing is magnificent. She knows how to tell the stories of ancient Rome in a way that are accessible and entertaining.

Some who are able to spin a good yarn are not careful with the details. Beard goes no further than the evidence will allow for telling this story. In other words, she does not traffic in speculation or try to fill in details we would love to have, but simply do not.

She does include details that make the story interesting throughout, but these are details we can be pretty confident of. For example, did you know that ancient Rome had one million inhabitants and that no city would have that many people until the nineteenth century?

Ancient Roman history is extremely relevant to the hurly-burly of twenty-first century America.

These Truths: a History of the United States by Jill Lepore

You can find my extended notes here:

Christianity at the Crossroads: How the Second Century Shaped the Future of the Church by Michael Kruger

What do the second and twenty-first centuries have in common?

Quite a bit, it turns out.

The second century was a time when Christianity was challenged by many philosophies and religions. Because of this volatility, Michael Kruger, in his wonderfully conceived overview of the second century, convincingly shows that it has much to say to our own situation today.

Kruger’s book fits a huge need as the second century has been largely ignored.

Among other things, this was the time when key defenders of the Christian faith arose to give articulate and persuasive arguments.

Kruger’s book also does a terrific job of showing that the canon was largely determined far in advance of Nicea.

Kruger is thorough without being pedantic. He is a skillful scholar who knows how to write clearly.

A Brief History of Thought: a Philosophical Guide to Living by Luc Ferry

I have friends who are philosophers and I have gained great insights from philosophers. It is unfortunate to say, but many philosophers don’t write in a clear or compelling style.

Ferry is a wonderful exception. I’ve wanted to read his book for some time since Tim Keller refers to it on a regular basis.

I was not disappointed.

The Revenge of Analog: Real Things and Why They Matter by David Sax

I’ve been posing a dare to some friends. I’m daring them to read the introduction to this book and seeing if they can stop. Like one potato chip (which is hardly digital!) they will find themselves devouring the rest of the bag, er book.

The Revenge of Analog: Real Things and Why They Matter is a terrific book. There is hard evidence in this book that digital is not the only game in town, but studies and statistics are augmented by engaging stories. Stories of people making things that we thought went the way of the Dodo bird add to the book’s allure, poignancy, and persuasiveness.

Vinyl records and used bookstores are back! They, of course, never totally went away, but their demise had an inevitability that was widely held.

So I dare you as well: Grab a copy (you will have to go to a bookstore to do this!) and read the introduction. I think you will find yourself wanting much more.

By the way, my “Moore’s Law of Reading” held true with this book. “Moore’s Law of Reading” takes the total number of pages of a book (242 with this book) and divides by two, so 121. If my marginal notes exceeds half of the pages then it was a worthwhile read. In this case, I made 166 marginal notes of various kinds, so it definitely was a great read.

The final volume in the “cultural liturgies” series.  I think this is the best of the trilogy.

The writing, as one expects from Smith, is consistently engaging. The author drives home his points with great examples from movies and literature.

I was glad to see Smith address the “godfather problem,” but some engagement with that challenge would have been good in Desiring the Kingdom.

As with all Smith’s books (I’ve now read six of them) you are always left pondering important truths, even when you may disagree.

The Great Theologians: a Brief Guide by Gerald McDermott

There is nothing wrong per se with giving practical suggestions for how to live the Christian life. In his terrific introduction to Puritan theology, J. I. Packer underscores how Puritan preachers gave many applications in their sermons.

Applying the truths of Scripture is critical to being a Christian who is growing. James 1:22-25 makes this crystal clear:

But prove yourselves doers of the word, and not merely hearers who delude themselves. For if anyone is a hearer of the word and not a doer, he is like a man who looks at his natural face in a mirror; for once he has looked at himself and gone away, he has immediately forgotten what kind of person he was. But one who looks intently at the perfect law, the law of liberty, and abides by it, not having become a forgetful hearer but an effectual doer, this man will be blessed in what he does.

The problem occurs when one’s reading is all about application. It is a problem, among other reasons, because we simply assume the author holds to a biblical framework. Sure the author may cite verses here and there, but are they handling Scripture responsibly? It takes biblical and theological discernment to determine whether that is the case.

What are the theological assumptions that the author holds? Those assumptions will inform how the author reads Scripture, and then makes his case for believers to apply his suggestions.

I am always on the lookout for thoughtful introductory books that help Christians think more carefully about their faith.

If you want to know more about the thinkers that are behind the “practical” books you are reading, McDermott’s book is recommended with gusto!

I may have read this in high school, but since our youngest son, Chris, told me how much he likes it, I read it this year.  Orwell is a master of the English language and an entertaining writer.

The pile of books to the right has some rereads: Five Days in London, May 1940 by John Lukacs, The Civil War as a Theological Crisis by Mark Noll, and The Great Divorce by C.S. Lewis.  All were well worth reading again!

Sources of the Self: The Making of Modern Identity by Charles Taylor and After Virtue: a Study in Moral Theory by Alasdair MacIntyre were definitely the most challenging reads.  My pace with both was never more than fifteen pages per hour.  Both are heavily marked up and were worth reading and discussing with good friends: Tim Taylor (no relation to Charles) and Bill Bridgman.

The Spiral Staircase: My Climb out of Darkness by Karen Armstrong

I have many theological differences with Armstrong, but this is a beautifully written and gut-wrenching book.

When Darkness Seems My Closest Friend: Reflections on Life and Ministry with Depression by Mark Meynell

My interview with Mark will be posted soon.