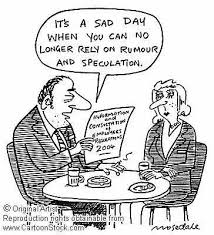 Speculation, rather than relying on God’s revelation, is the very real temptation for all of us.  It is fun to bend, twist, imagine, and come up with some new and sexy interpretation of Scripture.  Some things in the Bible do involve the struggle of careful interpretation.  Many other things are clear, but we just don’t like them.  So off we go speculating about other options.

Popular books on “spiritual warfare” contain a great deal of speculation.  Here are a few things I found in one such book:

*Demonic Transference
This is a popular belief among several contemporary writers on spiritual warfare. It is not the interpretation you find among the best modern or ancient commentators of Scripture. In fact, noted scholars of Christian missions say it owes more to paganism than Christianity. Here is what I wrote on it for an article I coauthored in the theological journal, Bibliotheca Sacra:
“Though the doctrine of generational transference is widely held, it lacks biblical support. In Ex. 20:4-5 the reference there to ‘visiting the iniquity of the fathers on the children, on the third and fourth generations’ should be understood as a description of severe judgment in which an individual’s line is cut off, not a transference (demonic or otherwise) of particular sins to the next generation. Actually even the idea of judgment is overshadowed by the grace of God when this formula is repeated elsewhere. Ex. 34:6-7 and Deut. 7:9 demonstrate that God may bring judgment for three or four generations, but His covenant faithfulness extends for a thousand. This promise, coupled with the focus on individual responsibility in Ez. 18:18-22, seems incompatible with the idea of inherited demonic affliction.”

Also, note what is specifically said in the text “of those who hate me” which would not apply to a Christian, and note what is not said: mention of demons.

*Lots of speculation, little revelation
Throughout this book, the author makes many assertions, but gives little or no biblical support. He utilizes the “trust me, I know what I am talking about” approach. When he does cite Scripture as with the “14 spirits” his interpretation is truly unique…not the kind of thing you want anyone saying about the way you handle Scripture!

There are cruel speculations about demons being involved where women have struggles with barrenness, arthritis, etc. Living in a fallen world with a fallen body gets little (I don’t remember any in the book) credit for such challenges.

*The desire for victory makes people vulnerable to spiritual fads.
There is a strong attraction to these kinds of books among those who yearn for much greater victory over their past and present struggles. This vulnerability coupled with a superficial understanding of Christian theology makes for a lethal combination.

*It is not just the Devil!
Our struggle is clearly with demonic powers, but there is also the world and our own sinfulness. Charles Spurgeon said if you took away Satan’s attacks he would still have plenty to battle with his own sin. Paul understood this as well (I Tim. 1:15).

If one looks through the history of the church one will commonly find statements which underscore the ongoing problem of personal sin.  Here is John Owen, a Puritan. Owen believed in demons and their ability to discourage believers, but he also appreciated the condition of the human heart: “The man that understands the evil of his own heart, how vile it is, is the only useful, fruitful, and solid believing and obedient person.”

Could too much focus on demons actually be a subtle tactic of Satan’s to get us to believe our problems are mainly external?

*Body, soul, and spirit
Most popular teachers on the Christian life believe we are made up of three parts (=trichotomy), but a word study in the OT and NT reveals that the spirit and the soul are pretty much the same. The three part view is used as justification that we are perfect in our spirit, but fallen in our soul. The more we can realize “who we really are” the less our struggle with sin. Perseverance and struggling in the power of the Holy Spirit (emphases throughout the history of Christianity) tend to get little or no attention from writers of popular books on “spiritual warfare.”

*Citing lots of verses does not mean one is being biblical
Throughout this book we find verses slung out left and right with very little context or explanation.

2 thoughts on “SPECULATION IS FUN”