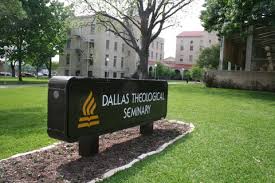 First, let me say that I know a number of Dallas Theological Seminary (DTS) graduates who are careful students of the Bible.  Among the faithful, I have recently been blessed to meet Jon Davies, the new teaching pastor at Brenham Bible Church.  Jon handles the Word with reverence and diligently applies himself in the study.  Last, and certainly least, is the fact that I myself am a graduate of DTS.  Though I am “agnostic” on certain, secondary doctrines other DTS graduates hold, I remain grateful to God for the indelible impact of both professors and students.

Back to the subject line of this post…That is what I overheard from a theologian who some would say holds to a less than “conservative” position of the Bible.

I was in the bookstore of the seminary where this particular theologian teaches and could not help but eavesdrop on the conversation.  The theologian said to her friend, “I was just on vacation and so we went to the church my in-laws attend.  A Dallas Seminary guy was preaching.  It is amazing how poorly he handled the Scriptures even though he believes in the inerrancy of the Bible.  I don’t believe in inerrancy, but I treat the text of the Bible much more carefully than him.”

Do you hold to inerrancy?  For a few brave souls out there, you may want to declare that you don’t even know what it is, but you have heard it is important!

One thought on “DALLAS SEMINARY GRADUATES DON’T PREACH THE BIBLE”