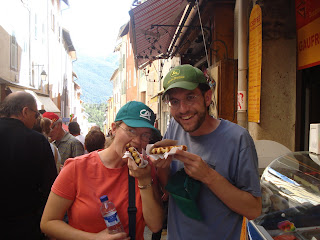 John and LIndsey Scholl are dear friends.  We met them during my interim pastoral ministry in Brenham, Texas.

The Scholls met at the University of California, Santa Barbara.  Both earned PhDs there.  Lindsey’s emphasis is ancient history.  Lindsey did her doctoral dissertation on Augustine and the Pelagian controversy.  John has a love for all things medieval including a special interest in heretics/heresy which has loads of practical implications for the church today.

The Scholls faced challenges in graduate school which made them wrestle afresh with the truthfulness of the Christian faith.  Lindsey’s counsel from her mom is a good reminder to all of us.

The Scholls had the opportunity to live in Italy for an extended time due to a Fulbright scholarship John received for his stellar doctoral research.

Currently, Lindsey is the Logic School Academic Coordinator for Trinity Classical Academy in Houston.  Lindsey is also finishing the third and final volume of her fantasy, The Advocate Trilogy.  John teaches history to college students.

Moore: You guys met at UC, Santa Barbara.  Tell us about how that happened.

Lindsey: We had entered our PhD program in the same year, and we were both TAs. So we worked together. John was one of the few Christian graduate students I knew, and so he and another friend of ours, Brian, became good friends. In our second semester there, John and I were taking a class on early Christianity taught by a professor who had openly expressed disregard for evangelical Christianity. So we had to rely on each other quite a bit for encouragement.

Moore: Lindsey, without getting too technical, you did your dissertation in an area related to Augustine.  Would you recommend a non expert trying to read Augustine today?  If so, where should one start?

Lindsey: Yes, I did my dissertation on the Pelagian controversy, which revolved not only around the issues of free will and predestination, but also around legalism and grace. Pelagius was a monk who became so intent on his free will position that he became quite a legalist. Augustine, partially through his commitment to predestinarian theology, made God’s grace a central platform in the controversy. But I wouldn’t recommend reading his Pelagian works first. Rather, one should start with Confessions. It’s a beautiful, short work that will introduce you not only to Augustine, but to the world of Roman Christianity. Some people try to start with City of God, but I wouldn’t recommend it. It would be like trying to swim the English Channel your first time in the water.

Moore: John, your dissertation addressed false teaching during the Medieval period.  Again, without getting too technical, would you tell us why you were led to research and write on it?  Also, how well do you think the American church does today in guarding against heresy?

John: I studied medieval Christianity initially because I wanted insight into the Reformation. In college, one of my professors implied that Catholics were on the right side of the Reformation because tradition and history were on their side, whereas Luther was suggesting something new. That really bothered me. I realized that if Luther was suggesting something new then there was a big problem with his ideas. As Christians, we believe that our faith has historical continuity, that we believe something that is millenia-old, so I wanted to find out if Luther had historical predecessors (aside from the Gospel writers). The answer, of course, is that he did. But my research ended up turning in another direction. Based on the advice of one of my professors, who urged me to choose a more medieval topic, and help from Foxe’sBook of Martyrs, I chose to study the Waldensians, my first heretical group. In the twelfth century, the Waldensians called on Christians to adopt the life of the apostles, complete with poverty and public preaching, but they were labelled heretics, because, not being priests, they were preaching without the authorization of local bishops.

Moore: Too many Christians find the study of history boring and irrelevant.  Why is that, and what can be done about it?

Lindsey: As long as Christians continue to value the Bible, they should value history, for at least two reasons. First, the Bible references history multiple times. How many times does God tell the Israelites to remember His works? When Stephen gives the sermon that would get him stoned, he gives the Jews a history lesson. Second, if Christians do not know their history, they have no defense against critics who say that the Bible has been translated too many times, that it was written by later authors than tradition states, or that it’s been disproved. That is why history is relevant. But if Christians find it boring, they should remember that church history, at least, is about our brothers and sisters in Christ. These are the people who are going to be slapping our backs when we get to heaven. It would be awkward to tell them that we thought they were boring.

John: I think part of the burden lies with teachers of history. At its foundation, history is a mosaic, composed of many little stories. Yet all too often, historians, and I include myself in this statement, are more interested in talking about theories than in telling stories that capture the imagination of their audience. As a teacher of history, whether the topic is church history or something else, I want my students to see how fascinating the topic is. At the same time, when studying the history of Christianity, we have to recognize how complex and, at times, troubling our history can be. Christians of the past are not always heroes; in fact sometimes they seem to do things that are genuinely wrong. This poses a challenge to Christians who study our past: how do we deal with these troublesome historical details?

Moore: You guys are currently teaching at different educational levels.  What are some of the things you use to instill a love for history in your students, regardless of their age?

Lindsey: I wave my arms a lot. That helps.

John: First, I start by showing them how much I love history by coming into class everyday with an obvious passion for the subject. Second, I try to make it easy to love. People enjoy stories, so I make sure to tell plenty of stories in my lectures.

Moore: Lindsey, you are finishing the third volume of The Advocate Trilogy (http://www.theadvocatetrilogy.com).  Why is a serious scholar writing a series for kids?

Lindsey: Much as I love history, writing is closer to my heart. I’ve been writing since the seventh grade and to give it up would be like giving up a part of myself.  Plus, I believe that Christian scholars are well placed to write fantastic fantasy, if the work of Tolkien and Lewis is any indication. The goal of The Advocate Trilogy is to give youth a high-quality, entertaining read both in the literary and moral sense. The trilogy has the marks of classic fantasy: adventure, strange creatures, and names that are difficult to pronounce. Yet it also takes its readers on a cycle of faith and doubt, all the while introducing them to the most important character of all: Kynell.

Moore: John, any chance we could we get you to write an accessible work on the importance of understanding and addressing heresy?

John: I am much more interested in writing an introduction to medieval Christianity. Take a look at the typical textbook on church history. The one-thousand-year Middle Ages (500-1500) is dispensed in less pages than the previous five hundred years. The Medieval Church often garners a bad reputation, as if the Church told everyone what to think and parishioners just said the correct lines in the church service – then Luther comes along and makes everything better. However, this popular version of the medieval church is terribly wrong. By studying heretics, I have learned how many people were willing to risk their lives on matters of faith. One person I studied joined six different religious groups in a thirty-year period, and was burned at the stake because of it. Meanwhile, the Waldensians were determined to preach to common people and as their reward, they received heavy persecution. Medieval Christianity was diverse, exciting, and creative, and the evidence reveals that many Christians across social strata were seriously concerned about their spiritual fate.

In other words, I study medieval heretics not because I’m interested in heresy, but because I’m interested in faith, and medieval heretics left behind a great amount of evidence concerning their faith. At the same time, studying heresy has convinced me of the importance of unity in the Church. In retrospect, many theological controversies labeled individuals as ‘heretics’ for theological beliefs that are not vital to our faith. If I were writing a book about heresy, I would encourage readers to keep central things central and not to make ancillary issues the standard by which we judge other believers.

Moore: Did going through graduate school at a secular school pose any significant challenges to your faith?  If so, what were they and how did you work through them.

Lindsey: Yes, there were many times the Christian faith–my faith–was challenged. I actually lost my faith in God for a short time during my Master’s program. It started with the dating of the book of Daniel. Modern scholars almost unanimously champion a late dating for that book, i.e. that it was not written by Daniel himself but several centuries afterward. At the time, I had no counter to that argument and it greatly rattled my confidence in the Bible. I felt my relationship with God slipping into oblivion, and I had no energy nor strength to stop it. I didn’t even research the authorship of Daniel further! I just watched it all go, and for a number of weeks I felt spiritually and physically ill. I had lost my closest, most constant friend and I didn’t know how to get Him back. I talked with my parents a great deal during that time: they fielded several random questions and doubts, but mostly listened to me be miserable. Then one night, my mom said, “Lindsey, I think you should focus on the resurrection.” I dismissed her suggestion at first. After all, what did the resurrection have to do with bigger questions of canonization and inerrancy? Eventually, I decided to take her advice and re-consider Christ’s final moments here on earth. In doing so, I realized again how rock-solid the resurrection is as an historical event. There is no theory that can come close to explaining it or the disciples’ subsequent behavior, other than the one Christianity maintains: that Christ died and rose again materially. So the resurrection became a foundation upon which God helped me rebuild my relationship with Him.

Moore: Give a word of encouragement to Christians who sense a call to the academy.

Lindsey: Three things. One, know your Bible. Chances are, you will know it better than many others there. Two, don’t give anyone a foothold when it comes to your work ethic and excellence in research. Do the best work you can and respect your professors’ academic expertise. Third, you can do no better than to strengthen your relationship with God. Everything else will follow from Him.

John: First, a warning: graduate school is very hard, and many professors either openly or implicitly dismiss Christianity, so your faith will be under attack. Second, a recommendation: pray early and often, and rely on God.