About five years ago, I spoke at Vanderbilt University.  I was invited by Professor Carol Swain. Carol’s story is truly amazing.  She dropped out of high school, got her GED along with a slew of other degrees, and ended up teaching at places like Princeton and now Vanderbilt.

Here is a six minute video on her incredible story: 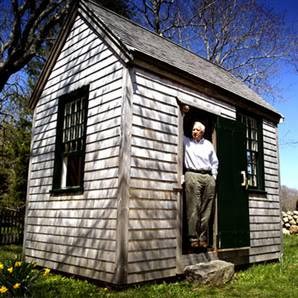 I visited Martha’s Vineyard on two different occasions over the past couple of years.  The first time was to give a series of talks on early American history and the second was to interview Tony Horwitz, Pulitzer-prize winning author.

Another well-known Pulitzer winner, David McCullough, also lives on Martha’s Vineyard.  Tony drove us by McCullough’s house, but during my first visit I was able to walk around McCullough’s backyard and get to see his famous writing shed up close and personal.

Here is a wonderful series on how McCullough paints with words! 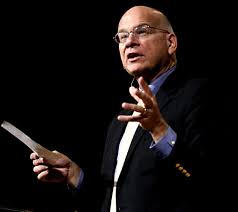 Tim Keller has much wisdom to offer.  Here he shares how he keeps his heart soft toward the Lord.

“I always pray in the morning, Lord make me happy enough in the grace of Jesus to avoid being proud, cold, scared, and hooked.”

The Dodo, of course, is well known for two things: being ugly and being extinct.  Discipleship where you invest long-term in a few relationships seems to have gone the way of the Dodo.

On Scot McKnight’s blog, he posted a poll on what top ten things pastors like about their calling.  I list them here with the comment I posted over at Scot’s Jesus Creed:

As a former full-time pastor and now itinerant, I find it disheartening (if this poll is any real indication) that discipleship is tenth and no comment made about that changing lives.

My own interaction with many pastors does reflect what the poll is saying. Few pastors seem interested in the non sexy work of long-term discipleship. Thankfully, I know some notable exceptions to what may be the general rule.

Wise and humble words on how to help children who raise doubts about Christianity:

This was one of the most widely read articles in the pages of Christianity Today.  Lots to think about…
http://www.christianitytoday.com/ct/channel/utilities/print.html?type=article&id=96521

London was remarkable in many ways.  He was a college dropout, but became a wildly (no pun intended) successful writer.  Here is his sage advice on writing:

1. Be decisive, choose something, then attack it.

Writing wasn’t London’s first career choice. When he was forced to leave college early after his finances dried up, he needed to do something:

I decided immediately to embark on my career. I had four preferences: first, music; second, poetry; third, the writing of philosophic, economic and political essays, and, fourth, and last, and least, fiction writing. I resolutely cut out music as impossible, settled down in my bedroom, and tackled my second third and fourth choices simultaneously. Heavens, how I wrote! Never was there a creative fever such as mine from which the patient escaped fatal results. The way I worked was enough to soften my brain and send me to a mad-house.

I wrote, I wrote everything — ponderous essays, scientific and sociological, short stories, humorous verse, verse of all sorts from triolets and sonnets to blank verse tragedy and elephantine epics in Spenserian stanzas. On occasion I composed steadily, day after day, for fifteen hours a day. At times I forgot to eat, or refused to tear myself away from the passionate outpouring in order to eat.

The early days for London were a period of restless exploration. He tried everything. But most tellingly, he wrote a lot.

2. Be persistent, endure struggle, and hone your craft.

We all have to toil away in our creative pursuits. But harder than the work itself can be the long period of gestation when it feels like nothing is happening.

The trouble with the beginner at the writing game is the long dry spells, when there is never an editor’s check and everything pawnable is pawned.
Success, though, is a stacking of the bricks. Each one leads to the next, and along the way the technique gets more effortless:

I struggled along, stood off the butcher and the grocer, pawned my watch and bicycle and my father’s mackintosh, and I worked. I really did work, and went on short commons of sleep. Critics have complained about the swift education one of my characters, Martin Eden, achieved. In three years, from a sailor with a common school education, I made a successful writer of him.

At the end of three working years, two of which were spent in high school and the university and one spent at writing, and all three in studying immensely and intensely, I was publishing stories in magazines such as Atlantic Monthly, was correcting proofs of my first book (issued by Houthton, Mifflin, Co.), was selling sociological articles to Cosmopolitan and McClure’s, had declind an associate editorship proffered me by telegraph from New York City, and was getting ready to marry.

3. Develop a routine and be relentless about it.

One key is figuring out what works for you and developing a steady routine. A common denominator of successful creative people is simply pulling the reps.

As I succeeded with my writing, my standard of living rose and my horizon broadened. I confined myself to writing and typing a thousand words a day, including Sundays and holidays; and I still studied hard, but not so hard as formerly… There was so much to learn so much to be done, that I felt wicked when I slept seven hours. And I blessed the man who invented alarm clocks.

4. Settle into a groove and make the act of creating part of your life.

At some point the routine becomes a livelihood. What you do is not separate from who you are. Your day is in service to your craft.

The program of my ranch life was as follows: Each morning, at eight-thirty, having been reading or correcting proofs since four or five, I went to my desk. Odds and ends of correspondence and notes occupied me till nine, and at nine sharp invariably, I began my writing. By eleven, sometimes a few minutes earlier or later, my thousand words were finished. Another half hour cleaning up my desk, and my day’s work was done, so that at eleven-thirty I got into a hammock under the trees with my mail bag and the morning newspaper. At twelve-thirty I ate dinner and in the afternoon I swam and rode.
Jack London wrote some of America’s most enduring stories. He was horrifyingly prolific. Take some cues from his work regime, and get on your own way to building a creative life.

I had the great privilege of interviewing Jean Bethke Elshtain.  She was a formidable intellect who consulted and corrected presidents.  Elshstain was a wonderful communicator both with the written and spoken word.  Her book on Augustine is beautifully written and contains loads of insight.

(This got me wondering what books I would pick!)

Saturday was a busy day, because in the morning we started at 9:00 to hear my mother’s new favorite author, Will Schwalbe.  His wonderful book is The End of Your Life BooK Club; it is about how, at the end of the author’s mother’s life, when she was dying of cancer, they formed a two-person book club, reading and talking about various books.  Schwalbe made a number of interesting points in his talk.

Second, Schwalbe is on a crusade to get more people to talk about more books.  He urges people, when they start a conversation, to ask “what are you reading?” rather than “how are you doing?”  He mentioned an example of a grandmother whose conversations with her grandson were rather perfunctory until she asked him what are you reading.  Hunger Games, the boy said.  The woman bought a copy, read it, and then asked her grandson a question about why one of the characters made one choice.  Soon, he said, they were talking about the book, and indirectly talking about the big issues that book raises.

Third, Schwalbe said, we are ALL in the End of Your Life Book Club; we just do not think about it that way.  We are all here for a limited time, with a limited number of books to read, and we should make them count.  He is NOT one of these people who says that one should read only the classics; he and his mother read a number of lighter books, such as PG Wodehouse.  But we should make use of the time we have to read and to talk about our reading.

This was brought home to me later in the day, after my own book talk.  We were upstairs, in the glorious upper hall of the Unitarian Church.  I was paired with Evan Thomas, author of among other things Ike’s Bluff, a great personality study of Eisenhower.  The drill was that someone was going to introduce Thomas, he was going to speak, someone was going to introduce me, I was going to speak, then we were going to take questions.  Before the event, Evan and I were sitting on the steps chatting with the person who was to introduce me, a nice young man, Owen, from the island’s book store.  We talked with Owen about this and that until the time came, then Evan and I went up on the stage, and Owen went down into the seats.

Evan spoke well, as one would expect from an author of about six books, then sat down.  I looked for Owen, but did not see him.  One of the other organizers came up to the stage, told the crowd that Owen had to leave to deal with an emergency, and that I “needed no introduction.”  I started by thanking my parents, and the Shacklefords, and Jane Moore.  Then I talked about Seward, especially emphasizing his connection with Nantucket.  He never visited, but he spoke eloquently about the island’s whaling industry, and the interest of Nantucket whalers in Alaska may well have prompted his interest, which led to the eventual purchase.

On the way out, I asked one of the organizers what the emergency was that had taken Owen away.  I hoped that she would say the emergency was something like one of the other authors needing a sandwich or some such.  Instead, she said that he had received a cell phone call and learned that his brother had died in a car accident.  The brother, she said, was only twenty-eight years old.

So, before I write another word, I need to say, to my siblings Fritz Gretchen and Karen:  I love you, I am proud of you.  We assume that the four of us will be saying farewell to Mom and Dad, and that is the likely scenario, but life (this is Schwalbe again) is like a book where you cannot see how many pages are left.  You could be reading a short story; you could be reading all three volumes of Marcel Proust.

Jonathan Winters, one of the truly great comedians, has recently died.  Enjoy this four minute clip of his greatness.