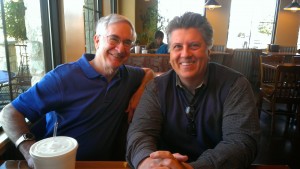 Dan Siegel offers three things that greatly help one’s overall mental health.  I rearranged the list (as found in Curt Thompson’s Anatomy of the Soul) so I could make the word FAN.  Here are the three things:

Focused attention exercises.  These are things such as prayer and meditation on the Word of God.

Aerobic activity.  Forty-five minutes a day at least five times a week.  We think better when we our body feels better.

Novel learning experiences.  Pushing yourself to learn something new.  Could be gardening, cooking, a new language, really just about anything that forces the brain to make new connections.

(I once was what you are and what I am you also will be). This memento mori underlines that the painting was intended to serve as a lesson to the viewers. At the simplest level the imagery must have suggested to the 15th-century faithful that, since they all would die, only their faith in the Trinity and Christ’s sacrifice would allow them to overcome their transitory existences.

The fresco, with its terrible logic, is like a proof in philosophy or mathematics, God the Father, with His unrelenting eyes, being the axiom from which everything else irrevocably flows.

One way I’ve thought of aging: It is a secret society which your younger self barely knew existed.  Quicker than you can imagine you are made a member of the club.  The dues are very steep!

What do you call a group of aging friends talking about their growing physical infirmities?

While on campus I finally got around to reading the Hays Festschrift.

My favorite chapter was the last one, written by Richard himself along with his wife of over 40 years. It’s called “The Christian Practice of Growing Old: The Witness of Scripture.” The chapter makes several excellent points:

1) Older characters in Scripture are often mentioned for their special wisdom or insight.

2) New Testament elders are worthy of honor and respect if not also special care and attention.

3) Aging “was never seen as a problem by the earliest Christians.”

4) The elderly bear a special responsibility to be models of faithfulness, temperance, and endurance.

6) Nowhere in the New Testament are the old said to be pitied or treated with condescension.

7) Like Jesus, we should seek the will of God no matter how old we are or at what age we die. “Consequently, as we grow old, we should seek to discern how to give our lives for others” (p. 660).

9) “The special responsibility of older Christians is to lead, to teach, to counsel, as their gifts allow and as opportunities arise” (p. 664).

Amen to that! Folks, I realize that aging is not without its mysteries. But when older people choose to serve rather than be served, bless rather than curse, love their enemies rather than fight, truly the kingdom of heaven is at hand. Those who know that they are not much longer for this old world have a heavenly-mindedness that has plenty of earthly good! So — let those of us who are older imitate Jesus. Let’s develop a radical vision of the kingdom. Maybe we could even become out-of-the-box thinkers, given the kind of radical God we serve. Talk about a good reason to grow old! Nothing could be more rewarding than surrendering your gray hair and arthritis to Christ. There’s a choice to made about life, and it is simply this: Will we sacrifice ourselves for others, with whatever resources the Lord has given us? I don’t know about you, but this 62-year old geezer — *creak, creak* — can’t wait to do just that.

The picture above is of our home library.  Lots of books and little room left to house them.  Pretty inexpensive to build due to free review copies from publishers, used bookstores, garage and library sales.

I am sobered every time I study there because it is a quiet reminder of my great limitations.  At 56, there are many I want to read, but time will most likely run out no matter how much of it is left.  And then there are all the books I want to reread!

So pay attention.  Your reminder of your finitude may not be a library, but there are other things.  And pray Ps. 90:12!