My brief reflection on many, and I mean many folks in the Republican Party, who I used to have some/much respect for:

SHILLING IS NOT THRILLING TO MOI!

ANSWER: AT A LIBRARY!

Libraries are a treasure for many reasons, not the least of which are great sales.  Our first purchase at a library occurred in Menlo Park, California during the 1980s.  We bought a nineteenth century edition of The Saints’ Everlasting Rest by Richard Baxter.  It cost 50 cents!  Sure, it was a bit beat up, but such a deal.

Since then, I’ve always tried to visit libraries, especially when I’m traveling.  The picture below shows five great books I recently bought in Florida for $1 each.  All are unmarked and ready for my own system of note taking. 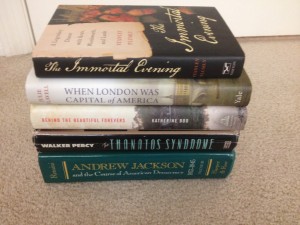 A personal word is in order. Wayne Grudem was the faculty adviser for both my wife and me during our time at Trinity Evangelical Divinity School (TEDS). Wayne was also the first reader on my thesis and a great encouragement during my two years at TEDS.

My friend, Paul, sent me Wayne’s piece, “Why Voting for Donald Trump is a Morally Good Choice.” (http://townhall.com/columnists/waynegrudem/2016/07/28/why-voting-for-donald-trump-is-a-morally-good-choice-n2199564). Wayne’s article is rather long, but there are a few points that warrant a friendly challenge.

In my own post I want to address a few biblical matters that impinge directly on whether someone is in fact making a wise decision by voting for Trump.

I’m not sure that Wayne using “flaws” to describe Trump’s character is the best word to use. At the very least the connotations of “flaws” as a slight offense or peccadillo seems not strong enough to fit Trump’s overall character. Well-intentioned people can disagree on this one, so I am fine moving on to other matters.

Along with many others, Wayne writes, “He has raised remarkable children.” It is easy to see why so many say this sort of thing, but what are we in fact saying? Do we think Trump and Trump alone is responsible for how his children turned out? Furthermore, aren’t we assuming that what we observe about the Trump children in public (respect for their dad, well-spoken, hard-working, etc.) is the totality of their character? What do we really know about Donald Jr., Eric, Ivanka, Tiffany, and Barron? Precious little, I would argue. They might be people of substance and consistent character, but our quickness in being impressed is misplaced.

There is another problem that arises from drawing a straight line from how good a parent must be by the ways their children turned out. Think of King Josiah. He had a bad grandfather (Manasseh) and not much better father (Amon). Then Josiah, a righteous king of note, had some notorious sons, especially Jehoiakim and Zedekiah. And don’t forget the models of Eli and Samuel with their own sons.   The Scriptures should humble those of us whose children turn out and encourage those of us whose children may be wayward.

Moving on, Wayne left out the most egregious thing about Trump: his claim of not needing to ask God for forgiveness.   Fortunately, Wayne did not compare Trump to King David, as Jerry Falwell Jr. did. Unlike Trump, King David understood both the consequences of his sin (Ps. 32) and the need to seek God’s forgiveness (Ps. 51).

Elsewhere in his piece, Wayne makes a point by retrieving a verse from the book of Jeremiah:

“Therefore I take seriously the prophet Jeremiah’s exhortation to the Jewish people living in exile in Babylon: ‘Seek the welfare of the city where I have sent you into exile, and pray to the LORD on its behalf, for in its welfare you will find your welfare.’ (Jeremiah 29:7)  By way of modern application, I think Christians today have a similar obligation to vote in such a way that will ‘seek the welfare’ of the United States. Therefore the one overriding question to ask is this: Which vote is most likely to bring the best results for the nation?” (Emphasis his)

I am a bit leery with the analogy Wayne employs here. First, some context to Jer. 29:7 is in order. Jeremiah had been telling Judah to stop resisting the noxious idea of going into Babylon as exiles. It was not a popular message. The false prophets said Jeremiah was crazy and couldn’t be hearing rightly from God. The false prophets had a much different idea: Judah should cozy up to the Egyptians and have them provide protection against the evil Babylonians.

So who would be the modern equivalents to Babylon and Egypt? Most Christians I hear are saying Hillary is clearly the worst of the two candidates. If that were the case, wouldn’t Hillary represent Babylon/Nebuchadnezzar and Trump be Egypt? Not only do I think Wayne’s example a poor one, but it seems to undercut the very point he wishes to make.

Sticking with the book of Jeremiah a bit more, remember that God calls the wicked Nebuchadnezzar “my servant” on three different occasions (Jer. 25:9, 27:6, 43:10). God remains in control even with the likes of Nebuchadnezzar, something that strikes me as crucial to remember this election year!

Wayne writes “I am writing this article because I doubt that many ‘I can’t vote for Trump’ Christians have understood what an entirely different nation would result from Hillary Clinton as president.” (Emphasis mine) Using “would” here was incautious. Elsewhere, Wayne modifies his comments with “likely” or “most likely.” Wayne also mentions “…we can never know the future conduct of any human being with 100% certainty…” It’s unfortunate his piece is not consistent throughout in this regard. I don’t think “likely” or “most likely” are great, but they are certainly to be preferred over “would.”

Historian, Mark Noll, likes to say that Abraham Lincoln was the best theologian during the Civil War. It is a provocative observation, but rings true when you see so many of that time assuming God was on their side. Lincoln was different. He underscored the inscrutable nature of God’s providence.