As heirs of the Protestant Reformation, we revel in God’s grace.  This is a good thing.  However, any good thing can become a bad thing if we forget other important truths.  We don’t have to work for our salvation, but we are to work it out (Phil 2:12,13).  It was the grace of God which motivated Paul to work hard (II Tim. 2:1-7).

Whenever I see someone going to great lengths to be the best they can be, I am humbled by Paul’s statement that many do it for a perishable wreath while we run for an imperishable one (I Cor. 9:24-27).  When I see someone giving intense effort and focus to something other than building up God’s kingdom I am humbled by my apathy.  Here is a good example of what intense focus looks like:

James McPherson is widely viewed as the foremost living scholar of the Civil War era.  McPherson’s book, Battle Cry of Freedom, won the Pulitzer Prize and has sold 700,000 copies.  Fifteen other books have come from McPherson’s gifted pen (and then followed by his trusty Olympia typewriter).

McPherson has won many awards for his work.  Along with the Pulitzer Prize he received the Lincoln Prize and the Pritzker Literature Award for Lifetime Achievement in Military Writing.

The following interview revolves around McPherson’s latest book, The War that Forged a Nation (http://www.amazon.com/The-War-That-Forged-Nation/dp/0199375771).

Moore: At the beginning of your book, you mention the spectacular success of the PBS documentary on the Civil War by Ken Burns.  Recently, I heard Civil War historian, Gary Gallagher, level some criticism about that documentary.  As you well know, other historians have also weighed in with their own concerns.  What are your thoughts about the portrayal of the Civil War found in that documentary?

McPherson: I also have a couple of criticisms of the Ken Burns documentary, but they are not necessarily the same as those by some of my colleagues.  The narrative script had a substantial number of minor factual errors–no single one of them would have merited criticism, but the cumulative effect marred the presentation.  Ken should have submitted the script to a careful reading by a couple of Civil War scholars.  Secondly, some of the photographs did not illustrate the particular events being described by the narrative–they were of another event or scene entirely.  Only those who were familiar with the photographs would have picked up on this, but these (relatively few) cases also were jarring.

At the same time, however, I think some of the criticisms canceled each other out: some southerners found it too “pro-Northern”; others found it “too Southern.”  Some found that it emphasized slavery too strongly; others that it paid too little attention to slavery as an issue that caused the war and that the war had to address.  Another criticism is that it largely ignored Reconstruction, and focused instead in the final episode on postwar reconciliation between veterans of the blue and gray.  I don’t agree with these criticisms–the purpose of the series was to present to a large television audience, only a fraction of which was greatly knowledgeable about the Civil War, the story of that titanic and momentous conflict.  The series succeeded spectacularly in achieving that purpose.  It aroused the interest of millions of viewers, many of whom went on to learn more about the war by reading books and articles, visiting battlefields, and the like. This in itself was a great boon to Civil War studies.

Moore: What is the significance of the “United States” going from a plural noun to a singular one?

McPherson: Before the war, the words “United States” were usually construed as a plural noun.  Local and state governments touched the lives of the average person much more closely than the national government; the identity and allegiance of most people was to their state or region more than to the nation.  The U.S. was a rather loose federation of states; the Bill of Rights was a restraint on the powers of the national government in favor of state and individual rights.  Nationalism existed, as was proved in the crisis of 1861, but the experience of war greatly strengthened it.  The North went to war in 1861 to preserve the Union, but came out of the war as a unified Nation in which the national government was far more powerful in 1865 than it had been four years earlier.  In the generation after the war the United States was (not were) on its (not their) way to becoming a world power.

Moore: Did both the North and South believe themselves to be following the direction of the Founding Fathers of our country?

McPherson: Both the Union and Confederacy wrapped themselves in the mantle of 1776 and 1787, and professed to be fighting for the ideals and institutions established by the Founding Fathers.  Just as the Revolutionaries of 1776 claimed to be seceding from the tyranny of the British crown and Parliament, the Southern disunionists of 1860-1861 claimed to be seceding from the potential tyranny of a federal government under Abraham Lincoln and his party.  But Lincoln and the Northern people fought to preserve the creation of the American republic from dismemberment and ruin, and therefore to preserve the legacy of 1776.  Confederates claimed to fight for the Constitution of 1787 with its protection of slavery and state rights; Northerners professed to fight to defend that Constitution from the destruction that would be the result of the breaking up of the Union that the Constitution had created.

Moore: Andrew Delbanco of Columbia has famously said that Americans believed in the providence of God before the Civil War and then in luck as they surveyed the war’s aftermath.  Seeing the scale of carnage rattled many people.  How much does the Civil War still shape the American consciousness about God and country?

McPherson: During the war, most people on each side believed that God was on their side.  Confederate defeat shook this faith in the South, to be sure, but the emergence of a “Lost Cause” mentality in the decades after the war which championed the idea that the Confederacy had fought nobly for the right even though they were overpowered by the Godless North helped reconcile them to defeat.  In the North, victory reinforced their faith the righteousness of their cause; the continuing popularity of Julia Ward Howe’s “Battle Hymn of the Republic” has sustained that conviction right on down to the present.  Lincoln famously argued that God had his own purposes in the war, of which the most important was to punish all white Americans, Northern as well as Southern, for the sin of slavery.  As Lincoln himself acknowledged, that was not a popular idea then, and perhaps is not popular today, but the recognition that the war purged the nation of the guilt of slavery that had made a mockery of its claim to be “the land of the free” has helped to inspire American nationalism ever since the war.

Moore: My own marginalia by your discussion of McClellan’s leadership is “presumption, paranoia, and pride.”  If my three p’s are somewhat accurate, could we say that Grant is somewhat of the antithesis to McClellan?

McPherson: The notion that Grant’s personality and leadership were the opposite of McClellan’s “presumption, paranoia, and pride” is an excellent one.  In all of these respects, Grant indeed was the opposite of McClellan.  He worked his way up from colonel of an Illinois regiment to general in chief of the United States armies step by step, earning these promotions by achievement rather than favor.  He never expressed jealousy of fellow officers or criticism of his superiors in the paranoiac manner that McClellan did, and he was modest about his success in contrast to McClellan’s exaggerations of his limited successes and boasting (in letters to his wife) about them, while he blamed others for his failures while Grant took responsibility for decisions (as at Cold Harbor) that resulted in failures.

Moore: Lincoln evokes strong emotions among Americans.  Opinions about him range from our greatest president to characterizations bordering on the demonic.  How high do you rank Lincoln’s presidency and why?

McPherson: I would rank Lincoln’s presidency as the most important in American history, or at the least equally important with George Washington’s.  Washington’s leadership launched the nation; Lincoln’s saved it from dissolution and purged it of the curse of slavery that Washington and the other Founders had been unable to eliminate from their new nation.  Much of the criticism of Lincoln has focused on his alleged violations of civil liberties during the war, but in fact these violations were considerably less than those of the Woodrow Wilson administration during World War I and the Franklin D. Roosevelt administration during World War II, even though the dangers from internal dissension in a civil war were greater than those during foreign wars.  Lincoln managed to lead the nation through a crisis that preserved its national integrity and ended slavery, and did so in a manner that also preserved democratic institutions.

Moore: Much has been written about the Civil War.  What are a few areas (people, ideas, or events) that have not been well covered?

McPherson: So much has been written about the Civil War that it is hard to identify areas or individuals that have not been well covered.  Two areas that have received some treatment, but would profit from more are the environmental impact of the war and the story of refugees in the South.  How serious was deforestation of large parts of Virginia, for example, or the marching, camping, fighting, and marauding of armies over thousands of square miles of farmland and woodlands?  How long did it take the environment to recover?  With respect to refugees, how many people were uprooted by the war?  How many families left home to escape the ravages of war?  How many of them died?  What about slaves fleeing their homes in search of freedom?  Is it possible to estimate the numbers of refugees, black as well as white, during the war?   What about mortality among them?  We know something about the mortality of blacks in contraband camps, but what about Southern whites who took to the roads?  The current focus on refugees fleeing the Middle East and Africa suggests that a more intensive study of refugees during the chaos of war in 1861 to 1865 might add an important dimension to our understanding of the war.

Yesterday, I posted something on learning, so I thought to add another thought.

My own philosophy education could kind of be boiled to two insights. First, is the ancient Greek saying of mathein pathein.  That is, to learn is to suffer.  It is similar to what I said yesterday how pain comes from true learning because it means finding out where we were in error.

Balancing out the sober insight of the ancient Greeks and Nietzsche is Ezekiel Cheever, headmaster in Massachusetts Bay.  Cheever said children ought to come to learn as “they come to play.”  Yes, real learning is tough, but it also includes joy.  And this from a dour Puritan!

Nietzsche said, “All truths are bloody truths for me.”

Yes, truth will set us free, but first we must face the bondage we love.

Real learning requires the risk of putting yourself in the vulnerable position of realizing how wrong you may be. 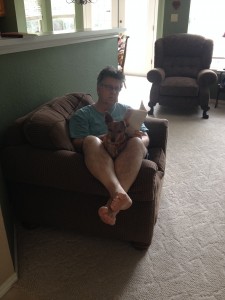 My interview with Duke’s, Norman Wirzba:

I will be interviewing Peter Korn in the next few months, but for now, take a look at what he is doing!