Wonderful advice that economist Steven Levitt received from his dad:

I remember this one time–I must have been like seven or eight years old–my dad took me to Gibby’s Diner. This was in the closest village called Quaker Street. And Quaker Street is just like one stoplight, a general store and the diner. And all my brothers and sisters had at one point worked at Gibby’s Diner either cooking or as a waitress or whatnot. And for my dad to bring me there alone, the two of us to sit at the counter, to this kind of sacred place. It was surreal to be there. And I remember we sat at the counter, and I don’t remember what I got to eat, but I remember my dad got a cup of coffee with a scoop of vanilla ice cream in it, which looking back I realized–he could have been a Starbucks imaginer. And I was having whatever I was having, and he introduced me to this game he called Powers of Observation.

And the way Powers of Observation worked was he would say, “All right, Stevie. I just want you to look around and take it in. Just really look around, pay attention, see what you’re looking at, take it in, and get attuned–and listen hard to, OK?” Like I said, I was probably just eight or seven years old, and he said “I’m going to give you five minutes to just take it all in.”

So I sat there and I looked around; and I take it all in. And I don’t really know where he’s going with this. And then after a few minutes, he told me to close my eyes.

“Nope. Chili. OK, how many people have come in since we started playing Powers of Observation?”

And on it went, just like that. And he’d grill me on these facts large and small, any kind of site, smell, sound–anything like that. And the first couple rounds we did this, I was terrible. I couldn’t get anything right at all. I just didn’t have any powers of observation. And then as we kept doing it, I got better. And then about after 20 minutes, I felt that I could take these little snapshots with my mind. And then repeat what I’d seen. My father, that one day, at Gibby’s Diner in Quaker Street, New York, he taught me that memory–or at least observation–is a muscle that you can build. And I’ve been flexing that muscle every day since then. Or at least trying to. So we were a family with practically no money, and without really that much time with each parent, but I will never forget that one day, that incredibly great thing, an incredibly valuable thing, that my father gave me.

Reading to my sister Lisa during the opening of our neighborhood library.  By the way, in case you have not heard of it, a library is a place that has a lot of books where people can borrow them… 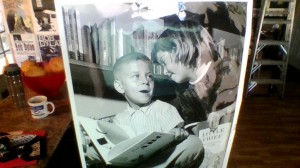 Video I made for my dad:

One of my favorite living writers, Eugene Peterson, reflects on the faithfulness of his parents:

The great suburban build-out is over….We shall have to live with its consequences for a long time. The chief consequence is that the living arrangement most Americans think of as “normal” is bankrupting us both personally and at every level of government…A further consequence is that two generations have grown up and matured in America without experiencing what it is like to live in a human habitat of quality. We have lost so much culture in the sense of how to build things well. Bodies of knowledge and sets of skills that took centuries to develop were tossed into the garbage, and we will not get them back easily. The culture of architecture was lost to Modernism and its dogmas. The culture of town planning was handed over to lawyers and bureaucrats, with pockets of resistance mopped up by the automobile, highway, and real estate interests.

You might say the overall consequence is that we have lost our sense of consequence. Living in places where nothing is connected properly, we have forgotten that connections are important.

Barnabas Piper (on the left) is one of John Piper’s sons.  Barnabas has recently written a candid account of being a pastor’s kid (PK), especially the PK of a famous pastor.

Here is a revealing answer to a question (rest of interview below):

Religion News Service: What is one thing people would be shocked to learn about the Piper household?

Barnabas Piper: Depends on who you ask. Those who are huge fans might be surprised to know that our family has a lot of tensions and quirks. We have dysfunction and conflict. We don’t always get along very well. It’s not the idyllic repository of peace and knowledge they might have painted a picture of in their heads.

Those who see him as a heavy-handed fire breather would be surprised to know that he loves movies like “What About Bob” and is fiercely competitive. He even got a yellow card for berating a referee at one of my brothers’ soccer games one time. Recent article on my dad’s faith: