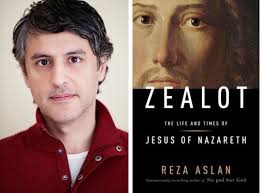 Wise review of Zealot: the Life and Times of Jesus of Nazareth by Reza Aslan:

The question is about as absurd as the picture.
This past Monday night I was coming back from a board meeting for our ministry and heard the host and his guest speculating wildly.  They even gave credence that the wedding of Cana in Galilee was in fact the wedding of Jesus!
Speculation is fun.  Speculation allows us to avoid the clear and many times hard edges of revelation’s claims.

THERE IS LOTS OF TALK ABOUT CHRISTIANITY.

LOTS OF TALK ABOUT THE CHRISTIAN FAITH.

LOTS OF TALK ABOUT WHAT CHRISTIANS BELIEVE.

LOTS OF TALK ABOUT WHAT CHRISTIANS DON’T BELIEVE.

LOTS OF TALK ABOUT LIVING THE CHRISTIAN LIFE.

LOTS OF TALK ABOUT THE CHRISTIAN WORLDVIEW.

LOTS OF TALK ABOUT HOW JESUS CAN FIX YOUR MARRIAGE.

LOTS OF TALK ABOUT EVERYTHING, EXCEPT…

NOT ENOUGH TALK ABOUT JESUS HIMSELF.

WHY IS HE UNIQUE?

WHAT MAKES HIM SO COMPELLING?

WHAT DOES IT MEAN THAT ONLY HE IS KING?

Many are aware of the famous reply of Mr. Beaver in The Lion, the Witch, and the Wardrobe: “Safe?” said Mr. Beaver; “don’t you hear what Mrs. Beaver tells you? Who said anything about safe? ‘Course he isn’t safe. But he’s good. He’s the King, I tell you.”

It is easy in our culture to migrate to an Aslan who retains his roar, but has really been declawed and left toothless.

John fell over like a dead man at the revelation of Jesus Christ (Rev. 1:17).  Yes, Jesus picks him up and says to not be afraid, but John’s awe over Jesus is something which is missing in our today’s chummy Christianity.

Athanasius (On the Incarnation) on how the incarnation of Jesus was just enough divine revelation to keep our heads from exploding!

“The Lord did not come to make a display. He came to heal and to teach suffering men. For one who wanted to make a display the thing would have been just to appear and dazzle the beholders. But for Him Who came to heal and to teach the way was not merely to dwell here, but to put Himself at the disposal of those who needed Him, and to be manifested according as they could bear it, not vitiating the value of the Divine appearing by exceeding their capacity to receive it.”

Years ago, I read and then interviewed Christopher Hall on his fine book, Reading Scripture with the Church Fathers.  Among other things, I was struck by something we take for granted in teaching “Bible study methods.”  It was something the early Fathers underscored over and over again, namely, that one’s walk with the Lord directly affects how well one will read Scripture.  Seminary classes I took assumed everyone was walking closely with Jesus (a very big assumption indeed) and that our main lack was in the skills of reading more carefully, making the proper connections, and then making sure our application(s) came directly from our interpretation.

David Crump makes a similar point in his important new book, but from a different angle.  Crump reminds us, by ably interacting with the many riches of Søren Kierkegaard, that one must first commit to the Person of Jesus to gain the real riches of Scripture.  Lest you think this sounds rather subjective and perhaps a bit anti-intellectual, you would be wrong.  Crump does a good job addressing that particular objection and so much more.

There are not many books that pack a lot to think about in less than 135 pages, but this is certainly one which does.

My recommendation to Eerdmanns: Consider making chapter 6 a stand alone book!  It would make a terrific resource for those wanting a lot of wisdom in short compass. 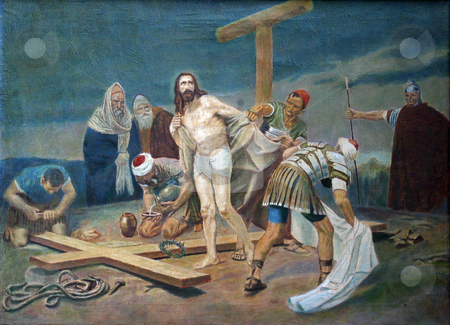 Ministering to a woman who was raped…two minutes of godly wisdom: 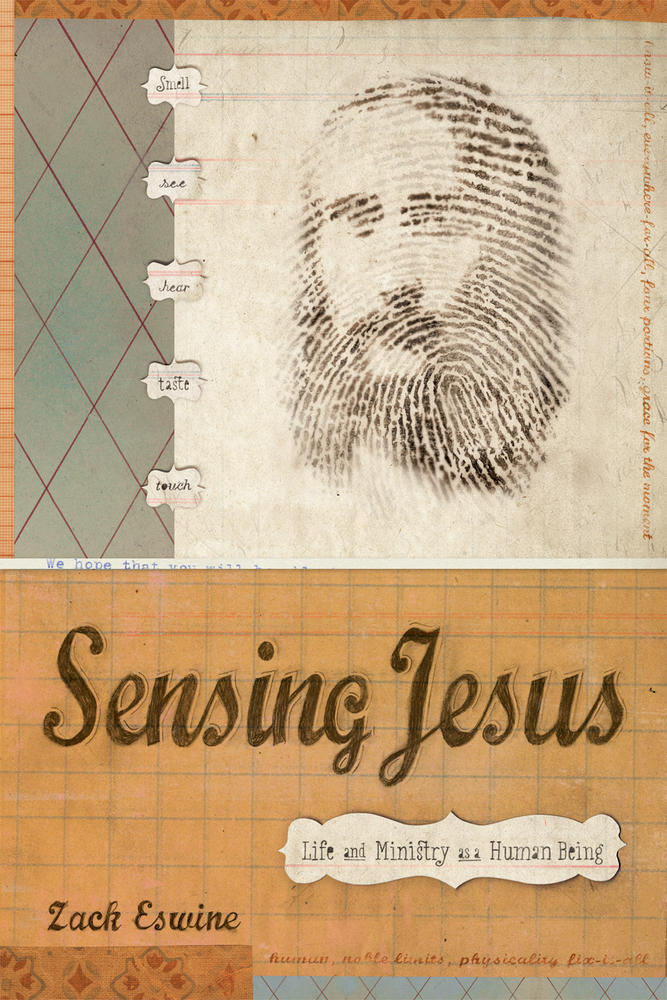 Okay, let me get something off my chest.  I want lots of people to read this book.  And I know it is written with pastors in mind, but any Christian who desires honest and hopeful growth will benefit greatly by reading it.  But there is a slight problem…

Sensing Jesus by Zack Eswine is truly a terrific book, but you would not think so judging by its cover.  I am on record saying another Crossway book (Why Cities Matter?) has a terrific cover and thereby heaped my praise publicly on the graphic designer.   I don’t know what happened with this cover, but I guess everyone has a bad day.  The cover for Sensing Jesus looks like a Shroud of Turin wannabe.

Covers and titles matter because they form the initial impression people have of a book.  I would love to see many buy Eswine’s book, but the title with the cover design are confusing and frankly, a bit cheesy.  Note to Crossway: redesign and retitle.

This truly is an important book which is geared for pastors, but contains much wisdom any Christian will benefit from.  Among other things, it will help non pastors better understand the peculiar challenges of pastoral ministry.

Eswine is a gifted writer who writes out of his own brokenness.  He could have easily fallen prey to self indulgence, but Eswine keeps God front and center.  Broken and vulnerable humanity is kept wonderfully tethered to the God of all hope.

The creative folks at Crossway need to get brainstorming a new title AND design!  And please do it before the next print run!

The present subtitle is good, so I say keep it as it is: “Life and Ministry as a Human Being.”

A wonderful word and we will allow Jason Allen to go beyond our usually short and punchier posts.

When it comes to writing history, Robert Caro is a giant among men.  This past year, Caro released the fourth installment of his projected five-volume biography of the 36th president of the United States, Lyndon Baines Johnson. Caro has devoted nearly 40 years researching and writing The Years of Lyndon Johnson, and he does not appear to be letting up anytime soon.  Caro’s life ambition crystallized in his mid-thirties – to write the definitive biography of LBJ, a biography that would truly stand the test of time.  This goal has propelled Caro vocationally throughout the lion’s share of his life and now sustains him into his sunset years.

Caro’s The Years of Lyndon Johnson has served to percolate increased interest in the 36th president and to position its author as an internationally recognized biographer.  Yet, as interesting as Caro’s ever expanding biography of Johnson is, a public intrigue with Caro himself has also piqued.  Indeed, Caro is a fascinating figure; we might even say a cultural icon.

Caro is eccentrically devoted to his life’s work. His lifestyle and work ethic resemble a 21st century sweatshop, albeit civilized.  For decades he has slavishly worked seven days a week, rarely breaking his routine even for holidays.  He enjoys no professional help, no research assistant or transcriptionist.  Caro foregoes modern conveniences such as a personal computer, preferring to draft his manuscript in longhand.  He dresses in a suit every day, only to work in solitude in his Manhattan office.  Caro’s office is a Byzantine gamut, littered with copious notes, stacked files, marked books, and walls covered with charts and graphs.  Eyewitnesses testify that Caro’s work environment more resembles a war room than a writing den.

Caro’s life-long effort to unearth Johnson’s life in pedantic detail is impressive enough, but not altogether satisfying for the accomplished author.  Rather, Caro aspires to know the mind and heart of Johnson; not merely Johnson’s actions, but what propelled his actions.  Thus, Caro has coupled with his assiduous research a practice of imbibing Johnson’s way of life.  Over the years, Caro has relocated his family in order to spend extensive time in Texas, Washington and even Vietnam.  All of this has been in an effort to feel what Johnson felt, see what he saw, and know what he knew. Herein lies Caro’s genius.  He is driven by a desire not merely to master the facts of Johnson’s life, but to know the very essence of the man.

As followers of Christ, perhaps we can learn something about discipleship from Robert Caro.  When we weigh Caro’s devotion to Johnson in the scales of our pursuit of Christ, we may be found wanting.  Caro has settled for nothing less than a deep and personal knowledge of his subject, LBJ.  Too many Christians settle for a superficial knowledge of Christ that fosters a superficial commitment to Him.

But, we need not look to Caro to be chastened. We can simply look to the Apostle Paul, who aspired to know Jesus, writing, “I count all things to be loss in view of the surpassing value of knowing Christ Jesus my Lord… that I may know him and the power of His resurrection and the fellowship of His sufferings, being conformed to His death” (Phil 3:8,10).

Our eccentric commitment may never be classified alongside Robert Caro’s in the world’s eyes, but knowing Jesus – and laboring to make him known – will prove unmatched in personal benefit and eternal consequence.

Allen’s post carries the title, “Robert Caro & the Pursuit of Knowing Christ.”
I changed the title to make sure more would read his terrific piece and not lose interest when they immediately saw a name which was unfamiliar.  Most know who LBJ is, few know of Caro…though the latter is a pretty remarkable fella!